Summer is my romance novel/vacation read time. This summer’s romance pattern: kilts. Rugged Scottish Highlanders tearing up the countryside as they fight with claymores and dirks, display their clan colors with pride on their kilts, and fight to save their damsel, even when she’s capable of saving herself. That description may sound like the plot to many, many different Scottish Highlander romance novels and I tell you, yes, yes it is. But when that plot line lands in the hands of certain authors, it twists and molds itself into a beautifully crafted story involving love, fealty, family, and fierce Scottish loyalty. Here I’ve gathered my most recent Scottish Highlander reads. Enjoy! (If you’re looking for more information about romance novels, check out the Romance LibGuide put together by one of our awesome librarians!) 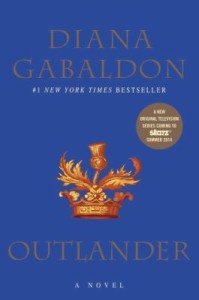 Diana Gabaldon is the author of the Outlander series, a total of 8 books with many novellas and other books added to the initial 8 books. She is currently working on the 9th book in the series. The first book in the series, Outlander, introduces the character of Claire Randall, a former combat nurse, who is reunited with her husband Frank as they reconnect on a second honeymoon in the British Isles. As they are exploring their surroundings, Claire and Frank stumble upon an ancient stone circle containing several plants that amateur botanist Claire is very interested in. One night, Claire is back looking at the plants when she walks through the stone circle and finds herself thrust into a different world. Dazed, confused, and lost, she becomes a captive of a group of Highlander men in 1743 Scotland. Forced to deal with circumstances thoroughly out of her control, Claire soon finds herself in the pleasure of a young James Fraser, known to his acquaintances as Jamie. Claire and Jamie soon are forced to rely of each other to survive. Gabaldon weaves the Outlander story around the delicate balance between Claire’s old and new life and the balance between her truth and the lies she must tell to survive. (If this interests you, this book/series has also been made into a television series – which is also available for checkout.)

My most recent Highlander romance series read was the Scandalous Highlanders series by Suzanne Enoch. I just finished 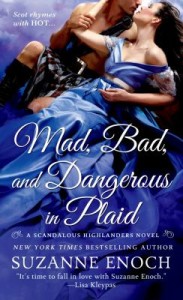 reading Mad, Bad, and Dangerous in Plaid, the third book in this series with a fourth due to release in October. I picked this book up not realizing that it wasn’t the first book until I was about halfway through and by then I was too hooked to start the series at the beginning. In this book, we find Rowena MacLawry has escaped the Highlands and run away to London to have her debut season after her brothers have expressly told her she could not. She returns home to the Highlands with a large number of her sophisticated English ladies and lords in tow to help plan the wedding of one of her brothers. Rowena, or Winnie as she is known to her brothers and to the dashing Lachlan MacTier, has brought along these sophisticated men to hopefully find a husband and to prove to everyone that she is over her 18-year crush and obsession over Lachlan. As soon as Winnie expresses her disdain for Lachlan, he realizes that maybe he doesn’t want her giving up on him just yet. A humorous and disastrous mix of complications plague the wedding preparations and Winnie and Lachlan are forced to come up with a rather ingenious plan to make sure everyone ends up happy. I recommend that you check out the first book in the series, The Devil Wears Kilts, and the second book, Rogue with a Brogue, before reading the third. Also keep an eye out for the release of the fourth!

(Handy tip: If you’re reading a romance novel and aren’t sure whether it is the first in a series, check to see if there are siblings to the main character and whether or not any of them are married or in a serious relationship. If this is true, you most likely are not reading the first in the series. This is a generality and is not always true. Just something I’ve noticed. When in doubt, contact us at the library and we can check.)

Bad Behavior has blocked 1494 access attempts in the last 7 days.