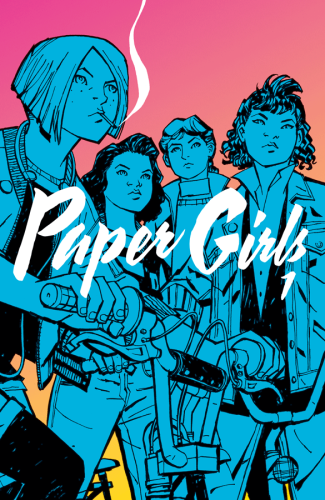 In the early hours of the day after Halloween, four teenage girls set out on their paper routes. “Hell Day,” they call it, as erstwhile teenage trick-or-treaters (emphasis on “trick”) still roam the streets and most do not welcome girl paper carriers, especially the very first paper girls. But what they encounter that morning is something much worse, much more deadly, than teenage bullies.

Set in 1988, Paper Girls follows Erin as she is saved from bullies by the very first “paper girl” Mac – a tough-talking cigarette-smoking 12 year old – and her paper carrying friends KJ and Tiffany.  They pair off for safety, but soon Tiffany and KJ are confronted by three boys in strange costumes who steal Tiffany’s walkie-talkie. The four resolve to find the boys responsible, ultimately following them to the basement of an unoccupied house. But instead of Tiff’s walkie-talkie, they find an incredibly strange, almost alien, capsule. It suddenly activates, the girls run outside, and see the three men who robbed Tiff. Confronting them, the girls discover that they are not in fact teenage boys, at least not as 1988 America would call them.

As the girls try to make sense of what has happened, the find that they world has abruptly and radically changed. The sky is pink, lightning flashes and what appear to be pterodactyls fly across the sky. Most people have disappeared, and communication technology no long works. Confronted by the radically unknown, the girls do what they do best – stick together, protect each other and never, ever back down.

Brian K. Vaughn (Saga, Y: The Last Man) creates yet another fantastic mystery in Paper Girls, capturing the defiance, fearlessness and loyal friendships of young teens as they face what may very be the end of the world. 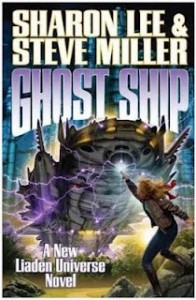 Ghost Ship, a novel of the Liaden Universe by Sharon Lee and Steve Miller

I was SO GLAD to see this new novel in the series come out! This is the third in the series-within-a-series, this one continuing the tale of Theo Waitley. Theo has grown up a lot from the student she was when we first met her, and she is still just as likeable as she was to begin with. With maturity and her First Class pilot’s jacket comes many more adventures and unexpected twists in her life.

It is a great story, full of relationships, characters you care about, mystery and intrigue. The only bad thing about it was it was over too soon, and the next one’s not out yet!