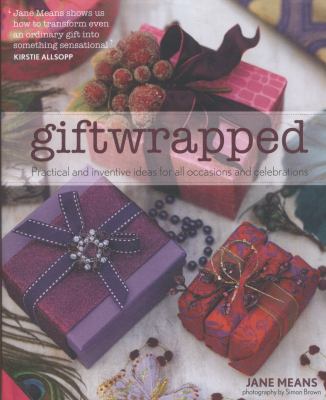 In this digital age, anything tangible somehow feels more significant or appreciated, and nowhere is that more evident than in the world of paper and giftwrapping.

Wherever you look, blogs or magazines offer ideas for enhancing a humble gift by embellishing it with vintage or reused materials. Giftwrapped builds on this trend, but takes it to a new and much more luxurious level while still keeping it real. ‘Gift Wrap Guru’ Jane Means, who wraps for the stars, royalty and high-end companies, offers her signature style and personal take on wrapping any present so that it is transformed into a gloriously gorgeous gift. Whether it’s a simple box, a tube or an awkwardly shaped tin, Giftwrapped describes how to achieve wrapping perfection with simple step-by-step instructions and Jane’s myriad tips, so that you can learn what really works for impact and elegance.

The personal touch is Jane’s forte along with an innate thriftiness. She’ll show you her ‘tricks’ on how to upcycle vintage treasures and reuse unusual wrapping papers, such as sheet music and old maps, to the best effect, as well as how to choose the perfect style for the gift’s recipient. (description from publisher)

This month is all about pumpkin lattes, Halloween costumes, and vibrant fall leaves, but it’s also when crafty people start looking ahead to the winter holidays. If you’re planning to create or make gifts by hand this year, now is the time to get cracking! Additionally, the Christmas and winter themed books that will be in short supply after Thanksgiving are abundant in October, so you are much more likely to find something inspiring when you stop by DPL.

The Art of Gift Wrapping: No matter what’s inside the package, thoughtful gift wrapping always makes it much more special. Instead of last-resort gift bags and tissue paper, check out this book for ideas and detailed instructions on innovative and lovely gift wrapping techniques.

Classic Crafts and Recipes for the Holidays: For timeless and sophisticated (and decidedly not “beginner”) DIY decorating, Martha Stewart’s books are the way to go. This particular one includes directions for some stunning outdoor-only ice decorations as well as decadent holiday recipes and some very creative uses for velvet.

Knitted Gifts and Holiday Knits each include the instructions for quite a few lovely knitting projects that are sure to please anyone on your gift list, from Christmas stockings to baby booties, cable-knit hats and mittens and decorative ornaments. All projects include photos and patterns. Easy for experienced knitters, but not out of reach for beginners either. 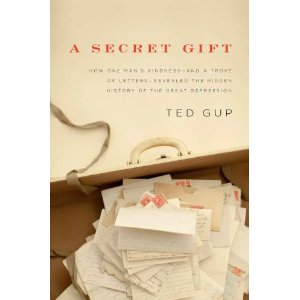 The Great Depression of the 1930s was the longest, most widespread and deepest depression of the 20th century. It’s effects were devastating – unemployment rose to 25%, even 50% in hard hit areas, and people struggled simply to get food on the table. Gifts for Christmas – let alone extravagant overspending – was impossible for many families and the holidays were just another day to get through.

Into this bleak landscape, in one of the most desperate areas of the country, a message of compassion arrives. An anonymous ad is placed in the Canton, Ohio newspaper offering 75 families in distress a cash gift. Letters were to be sent to a “B. Virdot”, General Delivery. Within days the post office was deluged. The mysterious “B. Virdot”, whose identity was never revealed, gave a modest gift of $5 (which, in 1933 was worth close to $100 today) to 150 families, spreading cheer – and more importantly hope – not only to them, but to others desperate to know someone still cared.

Nearly 70 years later, Ted Gup was cleaning out papers that had been left to him by his grandfather when he came across a cache of letters all addressed to a “B. Virdot”. Here at last, the mystery of who this anonymous benefactor was and why he did it are revealed and recounted  in A Secret Gift. In addition to discovering his grandfather’s life story, Gup tracks down many of the recipients of his grandfather’s gift and it’s impact on their lives. The stories of hardship are heartbreaking but the power of even such a small gift and it’s ability to turn people’s lives around is an inspiration.

Hey crafters! Have you finished making gifts for the coming Christmas season? No? But you’ve started them, right? Um – do you at least know what you’re going to make for the lucky people on your list? Oh dear – Christmas is just a little over three months away – you need to get busy! Here’s some great new crafting titles to help you out.

Embroidery Companion by Alicia Paulson –  Alicia’s new book is just as fun and charming as her popular blog Posy Gets Cozy. Clear instructions for a variety of lovely projects, with personal stories sprinkled throughout (including the adventures of Clover Meadow, Alicia’s corgi), you’ll be reaching for needle and thread in no time.

More Last Minute Knitted Gifts by Joelle Hoverson – The first title (Last Minute Knitted Gifts) created a sensation in the knitting world with several of the patterns in it becoming iconic; you can expect the same from this one. The patterns are simple yet sophisticated and modern and cover a range of moods and wishes. One note of caution – your idea of “last minute” and Joelle’s idea might not be the same!

One Ball Knits: Gifts by Fatema Habibur-Rahman – Here’s a great way to use up some of that leftover yarn you might have hiding in a closet. A nice variety of fun and useful projects for everyone from babies to grandparents make this a go-to source. And who wouldn’t love to receive a warm pair of slippers this winter?

Simply Sublime Gifts by Jodi Kahn – Whimsical yet stylish, these crafts are fun, inexpensive and quick to make; many require no sewing. Ideas range from baby onsies to fabric notecards to the amazing Wonder Bread wrapper apron shown on the cover. 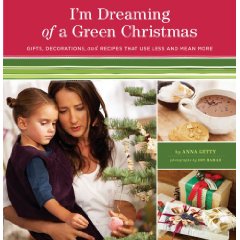 You can enjoy a colorful, festive holiday and still be eco-friendly. Check out I’m Dreaming of a Green Christmas by Anna Getty for lots of simple and creative ideas.

Getty touches on nearly every aspect of Christmas preparations – recipes, decorations, gifts – and also includes lots of general tips. There are the usual “green” recommendations with a focus on Christmas. For instance, buy local (purchase your tree from a local tree farm, and food and decorating materials from the Farmer’s Market), use what you have (create decorations from natural materials in your yard or common objects in your house) and recycle (make pillows out of worn out sweaters or ornaments out of tea bags) A lot of the suggestions have an old-fashioned charm – stringing popcorn for tree garlands, making wrapping paper out of newspaper – that have the added bonus of fun projects to share with children. Scattered throughout the book are lots of eco-tips which are useful at any time of the year. For instance, Getty has several recommendations for “green” shipping, claiming that UPS has the most environmentally friendly shipping policies and the largest alternative-fuel vehicle fleet.

Enjoy a greener and healthier holiday!

No, we’re not trying to push the start of the Christmas season even earlier than it already is (Halloween is plenty early) We’re just reminding all crafters out there that if you’re going to make any presents this year, the best time to start making them is now. Handmade gifts are probably the nicest, most thoughtful gifts you can give, but they take time. Here are some great resources for ideas and inspiration.

Closely Knit: Handmade Gifts for the Ones You Love by Hannah Fettig

Bag Bazaar: 25 Stylish Bags to Make in an Afternoon by Megan Avery

Craft Challenge: Dozens of Ways to Repurpose a Pillowcase by Suzanne Tourtillot

Bad Behavior has blocked 1264 access attempts in the last 7 days.