Space.  The corporate-dominated rim is populated by humans, augmented humans, computer systems and constructs.  All of which can communicate via the feed.

A team of scientists exploring a ringed planet has hired a security unit for protection.  SecUnits are armed security constructs with some organic parts.  Armor.  Helmet plate.  Energy weapons built into their forearms.

Humans control the constructs.  They tell them where to go and what to do.  A governor programmed within their code ensures that they follow instructions.

At least that is the plan.  But one SecUnit has managed to hack its governor, making it a rogue.  It does as instructed, because it doesn’t want the humans to discovered that it has free will.  Given the opportunity it will hang out in the cargo hold and pick from the almost 35,000 of hours entertainment it has downloaded.  It just wants to be left alone.

Sure, it will perform its job.  It’s been leased by the Company to the scientists.  It will respond to emergency situations and keep its clients safe.  But it doesn’t really care.  No one really takes its good advice anyway.  Heck, it’s not like it is the one who has the experience protecting people.

“SecUnit” is how the humans refer to it.  But it knows its true name.

All Systems Red is Book 1 in the Murderbot Diaries series written by Martha Wells.  It received the 2018 Hugo Award.  So far five titles chronicle the escapades of Murderbot.  The sixth is due out in spring 2021.

This title is also available as: 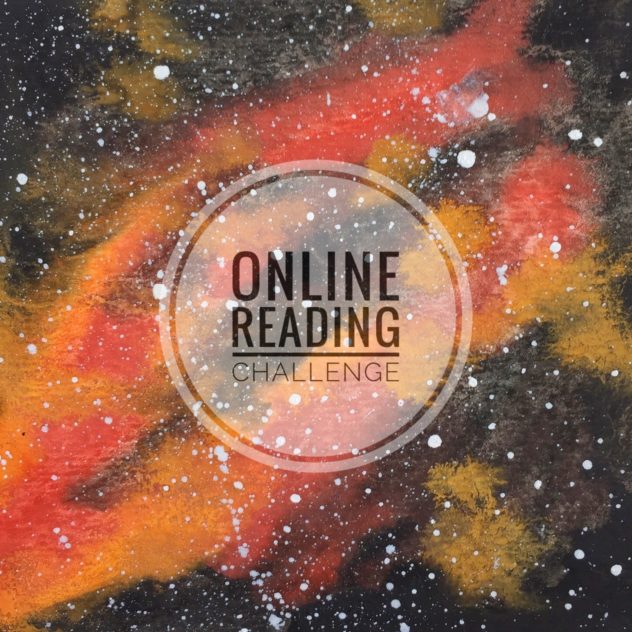 Hello Readers! Here we go with month #3 of the Online Reading Challenge. This month we’re traveling to the future!

Now, don’t pull that face at me. You know, the face where you scrunch up your nose and say “I don’t like science fiction”. You just haven’t found the right science fiction book yet. PLUS – not everything on the list is science fiction! There’s plenty for everyone to enjoy! Here’s sampling.

Dystopian fiction is in its heyday right now (although there are signs that this is beginning to taper off) and there are dozens of titles to choose. The Hunger Games series (both books and movies) by Suzanne Collins has been very popular for a reason. It’s horrifying without being too graphic and really makes you think about what you would do if you were in the same position as Katniss. It takes place in a world where scarce natural resources are held by the wealthy, keep control through an annual televised event that pits children from different districts in a fight to the death. When Katniss steps in for her sister, she must use her skills to survive and to put an end to the madness.

If you’d prefer something classic, go for The Handmaid’s Tale by Margaret Atwood, a chilling novel set in a world where birth rates have declined dramatically and any woman who has had a child is forced to serve powerful men in an attempt to give them children. Women have no rights, no access to knowledge, property or money and live in slavery. Now also a popular Hulu series.

For something futuristic but a bit less depressing, try The Martian by Andy Weir. It’s the future but not so distant that the technology is beyond comprehension. A mission to Mars goes horribly wrong when a dust storm forces the group to evacuate. They believe that one of their members, Mark, has died but in fact he has survived. He is now tasked with living alone, with few provisions, until the next scheduled Mars mission – in four years. A survival story, a tribute to ingenuity and perseverance, The Martian is a great read (and an excellent movie)

You might also try some JD Robb books, shelved in the Mystery section. A pseudonym for the popular author Nora Roberts, this series is set in a relatable future where the technology is advanced but human emotions and actions continue to create suspense and mystery. Great can’t-put-down books.

I’m going to read Station Eleven by Emily St John Mandel. Twenty years after a flu epidemic has wiped out most of civilization, a small traveling troupe of actors attempts to keep art and culture alive. Here’s hoping it’s not too dystopian!

For lots more suggestions, be sure to stop by any of our Davenport locations for displays of books and movies. And be sure to pick up a bookmark/reading log while you’re there!

Now it’s your turn – what are you going to read this month? 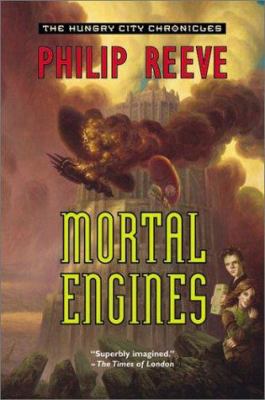 There is no shortage of post-apocolyptic books to read these days and looking at the books I’ve read over the past several years it is clear that I have an obsession a healthy interest in all things dealing with our planet earth in the future.  There is something so captivating about a story describing the collapse of earth as we know it and the subsequent reconstruction of a new society rising from the chaos—all from the safety of my twenty-first century life.

My brother recently asked if I had read the book Mortal Engines that Peter Jackson has based his next movie on and suggested I check out the trailer.  I usually try to avoid seeing even a smidgeon of a movie based on a book until I have read it, so I grabbed a copy of Mortal Engines by Phillip Reeve and dug in.

Mortal Engines is the first in a four part series, The Hungry City Chronicles.  It is a post-apocalyptic steam punk novel that takes place hundreds of years after the Sixty Minute War destroyed earth and made the land an unstable place to live.  Cities are now giant machines run by steam, rolling on wheels, and searching for increasingly scarce resources to survive.  These Traction Cities rule most of the earth, except for the Dead Continent (North America) and pockets of resistance can be found in The Anti-Traction League who wish to stop the movement of cities and slow the consumption of earth’s remaining resources.  Technology is almost non-existent and scavengers hunt for relics from the past to build on their knowledge of robotics, mechanization, and computers.

Mortal Engines begins on the city of London as fifteen year-old orphan and aspiring Historian Tom Natsworthy witnesses an attack on a prominent citizen and suddenly finds himself tossed into the Outland.  Tom struggles to make his way back to London with the help of Hester, who is also alone, but angry and seeking revenge.  The two unlikely friends embark on an adventure that uncovers a secret plot by London that changes everything Tom thought he knew about his city and the world.

Although the book was originally published over fifteen years ago, the idea of cities on wheels battling for survival was new to me and I thoroughly enjoyed seeing Reeve’s innovative take on this genre.  After reading the descriptions of traction cities, with level after level stretching to the sky reflecting the increasing wealth of its citizens the higher you go, it is easy to see why Peter Jackson decided to turn the book into a movie.   I watched the trailer when I finished the book and it is clear that Mortal Engines is going to provide a beautiful visual experience when it comes to theaters at the end of this year.  Before then, you should read this entertaining book to find out more about Tom, Hester, and a host of other colorful characters surviving on a very different sort of earth than the one we live on today. 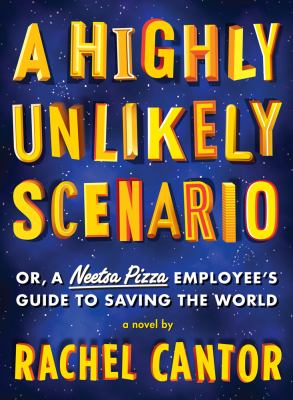 In the not-too-distant future, competing giant fast food factions rule the world. Leonard works for Neetsa Pizza, the Pythagorean pizza chain, in a lonely but highly surveilled home office, answering calls on his complaints hotline. It’s a boring job, but he likes it—there’s a set answer for every scenario, and he never has to leave the house. Except then he starts getting calls from Marco, who claims to be a thirteenth-century explorer just returned from Cathay. And what do you say to a caller like that? Plus, Neetsa Pizza doesn’t like it when you go off script.

Meanwhile, Leonard’s sister keeps disappearing on secret missions with her “book club,” leaving him to take care of his nephew, which means Leonard has to go outside. And outside is where the trouble starts.

A Highly Unlikely Scenario is a dazzling debut novel wherein medieval Kabbalists, rare book librarians, and Latter-Day Baconians skirmish for control over secret mystical knowledge, and one Neetsa Pizza employee discovers that you can’t save the world with pizza coupons. (description from publisher)

A list of excellent things about World War Z:

There are only two “bad” things about it, really. First, there’s a hefty helping of military action and associated jargon; if that isn’t to your taste, be prepared to skim or skip those paragraphs. Second, the interview-style format means that there is 0 character development, so if you rely on relatable characters to draw you into a narrative, that’s not going to happen here. But these aren’t really weaknesses as much as they are features of the book – for every reader who hates those features, there’s one who finds them fascinating. If that’s you, this book is sure to please. 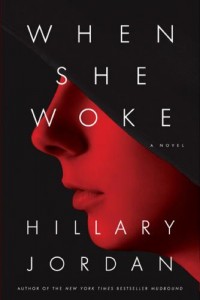 Hillary Jordan’s novel When She Woke is often described as a new dystopian take on The Scarlet Letter.  It is set in a future where an epidemic has left the majority of women sterile and abortion has been made illegal to prevent a declining population.  Prisons are also wildly overcrowded, so to remedy this, criminals who aren’t considered dangerous to society are not locked up but are instead “melachromed”: their skin is dyed so that their crime is instantly recognizable to the population.

The novel’s main character, Hannah Payne, is a very religious young woman who broke the law by having an abortion in order to protect the baby’s father, world-famous Reverend Aidan Dale.  Hannah is caught and tried, and she wakes up a the beginning of the novel with scarlet red skin.  The book flashes back to how she ended up in this position and how she deals with entering society as a an outcast due to the color of her skin and the nature of her crime.

This book was very compelling, so much so that I found it a little painful to have to put it down at times.  It’s a very interesting take on a futuristic society; it’s unique, but not so out-there that you can never imagine it happening.  This might even be a fun pick for a book club because its controversial nature could bring up some very lively discussion!

Bad Behavior has blocked 1620 access attempts in the last 7 days.