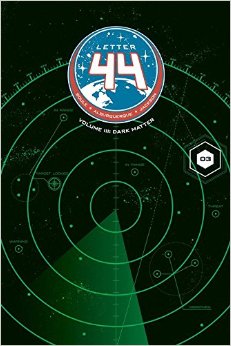 Series books of any kind are one of my favorite things to read. I get hooked into the characters’ lives and find myself wondering just what is going to happen to them in the next volume. This is what was happening to me as I sat waiting for Letter 44, Volume 3: Dark Matter to be released for me to read. (I have previously read and reviewed the first two volumes, so check out the reviews of Volume 1 and Volume 2!)

Letter 44, Volume 3: Dark Matter continues investigating into the lives of the astronauts on the Clarke and the people on Earth. At the end of the previous volume, President Blades released the knowledge of the presence of alien life in space to the people of Earth despite being warned of the disastrous consequences this could have for everyone involved. After the release of this information, world war broke out. Countries are battling for control of the planet, most notably a coalition of nations led by the United States and a secret second group that is being controlled by former President Francis Carroll and the barrage of secret weapons he had developed during his term as President.

While this battle for control of the Earth rages on, the crew of the Clarke has been captured and is being held somewhat captive by the aliens that they discovered in space. The only way for them to try to escape is to cooperate fully with their captors, much to the chagrin of some crew members. Left with a ship that has been partially destroyed and having no way to communicate with people back on Earth, they are left to rely on the small tidbits of information they can gather from the aliens. Gaining access to information through somewhat back channels and limited access to the aliens’ own communication devices, the crew learns that a massive threat is heading straight towards Earth, a danger that no one on earth knows about. Communications become a dire need and the crew of the Clarke is forced to use any means necessary to find ways to contact Earth. Massive world war, corrupt politicians, alien life, asteroids heading toward Earth, assassination attempts, and crazy high-tech weaponry make this an incredibly fast-paced read, action-packed, compelling, and gripping. I could not put this book down and am immensely looking forward to the next volume!