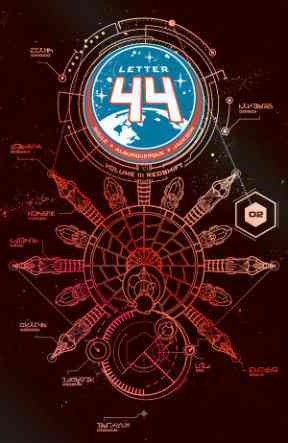 Previously I reviewed Letter 44, Volume 1: Escape Velocity and was instantly intrigued. As a result, I decided that I needed to find the second volume to figure out how the story progressed. Letter 44, Volume 2: Redshift goes further into the extraterrestrial life the astronauts on the space ship, Clarke, discovered in the first volume.

With President Blades struggling to deal with if and when he should alert the public to the existence of the aliens, he finds himself having to deal with other people in the government who are calling for him to tell the truth and if not, risk being impeached. This alien presence is becoming more than he think he can deal with and instead of following the plan laid out for him by the previous administration, he decides to go his own way and ends up thinking more short-term than long-term. That decision ends up costing the American people dearly.

While Blades deals with threats from inside his administration and tries to balance everything happening outside, the people on spaceship Clarke are struggling just to live day-to-day. Losing one of their own on the asteroid and with a newborn baby on board, they are trying to figure out what the aliens want and what their device is actually for. Learning what the aliens plan to do throws the crew into a state of panic, especially when it is discovered that one of their own has the ability to communicate with the aliens. This second volume is jam-packed with action, sabotage, danger, and the struggle to survive. Personally, I cannot wait for the third volume, so I can catch up the crew of the Clarke and see how Blades is doing as President.