I’ve always loved this movie. Written by the great Nora Ephron, it is funny and sweet with interesting characters to root for. It’s also a love letter to New York City, which headlines the movie with glorious scenery and where everything is a little bit magical (and very clean). The movie has also become a source of nostalgia – pre-pandemic, pre-9-11, a less complicated, more innocent time (And dial-up internet! Do you remember dial-up internet?!)

For book choices you can go several ways – books taking place in New York City, books about enemies that become a couple, books that tell part of their story through email to books with classic rom-com elements. Here are a few ideas.

Time After Time by Lisa Grunwald – When Nora is transported from the 1920s to 1937 during the “Manhattanhenge” in Grand Central Terminal, she must learn to live a full life within massive limits.

City of Girls by Elizabeth Gilbert – A unique love story set during the the 1940s New York City theater world.

The City We Became by N.K. Jemisin. Magical realism where five New Yorkers must come together to save their city.

The Coincidence of Coconut Cake by Amy Reichert. A chef and a food critic fall in love without knowing who the other is.

The Hating Game by Sally Thorne.  For the executive assistants to the CEOs of a newly merged company, it’s hate at first sight. But over time, that begins to change…

Attachments by Rainbow Rowell. As an “internet security officer”, Lincoln must monitor the emails of employees but finds himself falling for one employee instead of turning them in.

Where’d You Go, Bernadette by Maria Semple. Both hilarious and touching, this book is told through a series of letters and emails.

The Dollhouse by Fiona Davis. The Barbizon Hotel for Women in New York City was a safe haven for young women in the 1950s who were seeking adventure and independence in the big city.

I’m planning on reading The Lions of Fifth Avenue another historical novel by Fiona Davis. It’s set in the New York Public Library and alternates between two time lines. Should be fun!

What about you? What will you be reading this September? 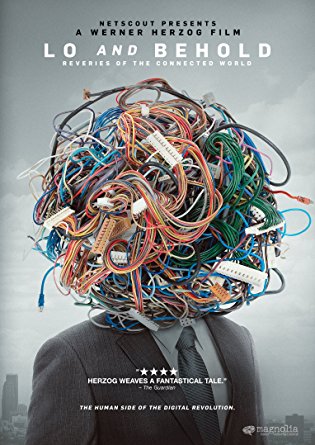 Lo and Behold: Reveries of the Connected World is a documentary DVD that explores the influence of the internet on human life.

It begins by following internet pioneer Leonard Kleinrock into a room on the UCLA campus where the first internet communication took place at 10:30pm on Oct 29, 1969, between UCLA and Stanford Research Institute. Kleinrock describes the moment he began typing the very first internet message, “Login.” Before he could complete it, the computer system crashed, and the first message transmitted by the internet turned out to be “Lo” – thus the movie’s name.

Director Werner Herzog takes us to Stanford Dept of Robotics, where we learn how the discovery of biomolecule patterns was enhanced by the creation of a crowdsourced video game called EteRNA. Crowdsourcing, as defined by Wikipedia (itself a famous example of crowdsourcing) is “to divide work between participants to achieve a cumulative result.” In this case, a videogame played by a multitude of interested laypeople -“lawyers, grandmas, students, bedridden people” contributed in useful ways to the collective knowledge base about RNA (Ribonucleic Acid), which is present in all living cells. Crowdsourcing has been used in a variety of other ways for the common good. In addition to Wikipedia, another well-known example of crowdsourcing is crowdfunding, the collection of funds from a crowd (for example, Kickstarter). If you would like to learn more about how you can be similarly involved in contributing to the universe of knowledge (sometimes even by playing video games!) see this list of crowdsourcing projects.

While at Stanford, Herzog takes us to Professor of Computer Science and director of the Artificial Intelligence Lab, Sebastian Thrun, who is designing self-driving cars. He addressed the concern for safety of self-driving cars by saying, “When a computer makes a mistake, it learns from it, along with all the other computers (in use and unborn.) When a human makes a mistake, just that one person learns from it.” He shares a fascinating anecdote about a certain class he taught to 200 students enrolled at Stanford. He was able to offer the same course online to interested members of the general public. Over 1000 people signed up for the online class. When he tested them, he found that the best Stanford student ranked 412th among all the students combined. From this he said he learned that for every one great Stanford student, there are 412 better out there in the world who couldn’t or didn’t go to Stanford.

Then, we are presented with some particularly dark sides of the internet. The family of Nikki Catsouras shares their story, explaining why they no longer use email or the internet. Nikki died in a car accident in 2006 when she was 18 years old. Gruesome photos of her decapitated body were posted online shortly after the accident. Then, the family began receiving anonymous emails containing the photos, one with the caption “Woohoo Daddy! Hey daddy, I’m still alive.” The Catsouras family deeply lamented the lack of accountability on the internet.

What would today’s landscape be like without the internet? We find out more about that by visiting Green Bank, West Virginia, home of a telescope 100 meters in diameter that picks up radio waves from outer space. To eliminate interference with the radioastronomy project, all wireless transmissions are disabled within a 10 mile radius. The area has become a haven for people who experience severe physical reactions to being in the presence of radio waves. Diane Schou and Jennifer Wood describe their lives before they moved to Green Bank. They spent all their time inside Faraday cages –  boxes named for the 19th century scientist Michael Faraday, designed to shield their contents from electromagnetic fields. Some regard their condition as a supersense. They regard it as a nightmare.

We visit an internet addiction treatment center near Seattle, Washington where we hear the personal stories of some clients. We learn about a South Korean couple who were imprisoned for allowing their newborn daughter to starve to death while they were consumed with playing a video game. Ironically, it was a game in which they were nurturing an electronic baby.

Adler Planetarium astronomer Lucianne Walkowicz tells us about large solar flares called Carrington Events, which have the power to disable communications and create widespread power outages, and how we could see the next powerful solar event soon. We are given a glimpse of what that might look like from footage of a recent, relatively small-scale blackout in New York City. Theoretical physicist and cosmologist Lawrence Krauss warns “if the internet shuts down, people will not remember how they lived before that.”

Famous hacker Kevin Mitnick is interviewed about the methods he employed to gain access to secured information. He goes into detail about how he manipulated weaknesses in cybersecurity systems, noting that he always found them in the people, not the systems.

In the final third of the documentary, the possible future of Artificial Intelligence is explored. Entrepreneur Elon Musk, who made a fortune through PayPal, talks about the rockets he is launching into space, and his goals of creating a colony on Mars in case Earth becomes unlivable.

Marcel Just and Tom Mitchell, brain scientists at Carnegie Mellon postulate on whether or not it is possible for computers to dream.

The Wikipedia Emergency Project is described. It is a plan that people should print out hard copies of the information found on its website and store them somewhere our heirs can find them should a catastrophic planetary event occur.

The documentary prompted much thought, and left me with so many questions the first time around, I eagerly watched it a second time a couple of weeks later, after I gave myself some time to let the ideas rattle around in my mind for a while. If you like to explore multiple sides of issues relating to the past, present, and future of technology I would recommend you watch Lo and Behold: Reveries of the Connected World.