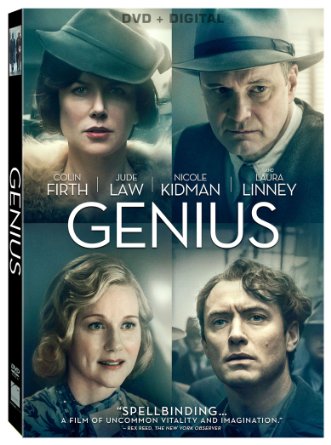 I’m a sucker for literary movies, movies that give me a glimpse into the lives of my favorite authors, the time period that they were writing, and their motivations for writing. Genius fell right into my lap one day and I knew I needed to watch it.

Genius tells the story of the relationship between Maxwell Perkins and Thomas Wolfe. Perkins was a book editor at Scribner, one who discovered F. Scott Fitzgerald and Ernest Hemingway, among others. Thomas Wolfe’s manuscript was put into Perkins’ hands by an associate who said that is was unique and that he should take a look at it. What follows is a deep dive into the psyche of Wolfe and Perkins’ relationship.

Wolfe is portrayed as a lovable American South writer who does not believe his novel will ever get published after he worked on it for four years. Perkins drops into his life right when he is at a crossroads. The two work together to carve down Wolfe’s massive manuscript into something the public will actually read. The scenes where Wolfe and Perkins are actively working on his manuscript are some of my favorite as both of their personalities shine as they rally for their favorite parts to be saved or for certain sections to be cut. Perkins’ relationship with his family as well as Wolfe’s relationship with his lady benefactor also play key roles in this movie.

Ernest Hemingway and F. Scott Fitzgerald make frequent appearances in the movie, letting viewers see into their own personal lives and the struggles they were facing as writers. Seeing the characters’ relationships grow and change throughout the course of this movie really allows viewers to see how complex Wolfe and Perkins’ relationship was with each other and with the outside world.

This movie is based on the 1978 National Book Award-winner Max Perkins: Editor of Genius by A. Scott Berg. It’s important to remember that this is a dramatized version of a biography, so the director and writers strayed from the book a little bit. If you’re curious about what was left out or need a little more background, check out this New Yorker article entitled “The Odd Factual Gaps in Michael Grandage’s ‘Genius’ “and judge the movie’s authenticity and factuality for yourself.