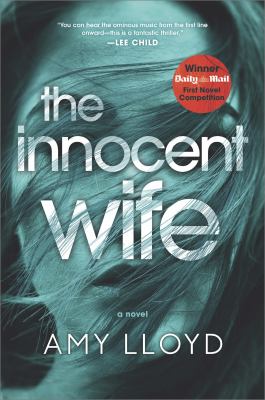 I stumbled upon The Innocent Wife by Amy Lloyd when scrolling through RiverShare OverDrive looking for my next read. I spend a lot of time commuting for both my work and my fiancé’s job. Having books easily accessible whenever I need them is one of the major reasons that I use the RiverShare OverDrive app available through the Library. (It sure beats having to haul a backpack full of books when a weekend work trip for my partner pops up at the last minute!) Anyway, I found The Innocent Wife on our last road trip and decided to give it a try.

The Innocent Wife by Amy Lloyd tells of the burgeoning love between Samantha and Dennis. Their love isn’t all sunshine, rainbows, and flowers though, as readers are quick to realize. Samantha lives in England and spends her time outside of work obsessing over the case of Dennis Danson. Dennis is a prison inmate who, over twenty years ago, was arrested and thusly imprisoned for the brutal murder of a young girl in Florida. Dennis’ case is full of mysteries as it comes out that multiple other girls disappeared in the same area around the same time. No one was ever arrested for those disappearances though, nor where any of the missing girls’ bodies found. Many residents of the area believe that Dennis abducted and killed the girls, but that police only had enough evidence to convict him of the murder that landed him in prison.

Dennis is now the subject of a true-crime documentary that has succeeded in grasping the attention of the  national media and social media. People online and in person have come to believe that Dennis was wrongly convicted and that they are the only ones who can uncover the truth. Samantha finds herself on these message boards and reaches out to Dennis to talk to him about his case. As the two communicate through letters, Samantha quickly finds herself wooed by his charm and kindness towards her. Uprooting her entire life, Samantha decides to travel to Florida, meet Dennis in person, and begin campaigning for his release.

As soon as Samantha steps out into the balmy Florida heat, she begins to feel uneasy. She continuously pushes her feelings to the back burner in order to put Dennis and the campaign for his release first. After all, everyone would have cold feet meeting someone in person for the first time, right? That would be awkward for anyone. Nevertheless Samantha decides to marry Dennis(NOT A SPOILER, GUYS! It’s called The Innocent Wife after all…). After they are married, major developments happen in Dennis’ case and Samantha is forced to face some uncomfortable realizations about both Dennis and herself. Her confidence in Dennis’ innocence begins to waver, but with the intense media scrutiny and their marriage, she still feels the need to stick by him. Samantha doesn’t know Dennis as well as she thought she did despite her initial unwavering support of his innocence. The more time she spends with Dennis, the more she realizes that she might not want to know the real truth about his past.

Give this book a read and let me know what you think. I had complicated feelings toward Samantha as a main character that almost made me want to read something else. There are also several other characters that both intrigued and slightly appalled me. I’m curious about your opinions.