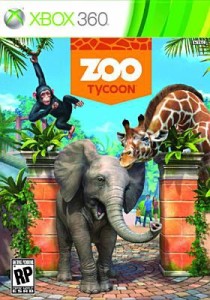 When I was younger, the Tycoon series of games was really popular. Everyone seemed to be playing them and after several months of begging, I was finally able to convince my mother to purchase a copy of Rollercoaster Tycoon. As I was looking over the videogame section at the library, imagine my happiness when I found Zoo Tycoon, a build-your-own-zoo game put out by Microsoft Studios for the Xbox 360 in 2013.

Looking online and also talking to other gamers results in a wide variety of definitions for the term “tycoon games”. In tycoon games, instead of just controlling one character, you are acting instead like “the manager” who is in control of a wide variety of people or animals, as well as the place where all of the activity is happening. That is very true in Zoo Tycoon. Here the game offers you tutorials, so you aren’t flying blind into how to operate and run your zoo. As the over-seer of the whole zoo, you need to remember to play smart because the guests who visit your zoo, as well as the animals, will ultimately decide just how well you are doing as a zoo tycoon.

This interactive game lets you design your zoo, build, and then manage it to make sure more and more guests keep coming and visiting. Once you build your zoo, you then get to have face time with all of your animals. You are allowed to adopt and care for your animals with the ultimate decision for you to then release them into the wild.

This game was interactive for me and definitely brought back memories of the older tycoon games that I had played. Check it out and let me know what you think!

One of my favorite things about working the reference desk is having conversations with the many patrons that I see on a day-to-day basis. One of my go-to questions to ask people is “What is your new favorite thing to do?” Well, today’s blog post centers around one of the answers I received a week or so ago. One of the younger patrons I was helping mentioned that his favorite thing to do when he doesn’t have a book to read and hasn’t had time to make it to the library is to use Wattpad. Naturally my curiosity was piqued as I had never heard of Wattpad before and I wanted to know just what this was that he uses when he couldn’t make it to the library.

Wattpad is an online writing community composed of never before published writers, already published writers, and people who are just looking for a place to write down their thoughts. This can be accessed either online or by downloading the Wattpad app. On a long car ride, I spent a few hours playing around in the app and discovered a few interesting tidbits. This app does not have an age limit and the content can be anything, from fanfiction to any genre you can think of, so be sure to read the blurb presented with each story before opening and reading it. Wattpad allows you to comment on the stories that you read and to follow the authors that you like, so you can be alerted when they publish something new. You can read anything from published works to works-in-progress. Join groups of people who write things similar to yourself or stories that you like to read. Vote for the stories you like to win different awards. If you’re feeling brave, you can also write and put your own work online for other people to read. All in all, Wattpad is fast becoming one of my favorite apps to play with when I’m looking for inspiration and don’t want to carry a book around with me. Try it out and let me know what you think!