Now that the description has been given, let’s delve into the fun part: figuring out what graphic novels have been banned and for what reasons. Every year, the American Library Association, also known as the ALA, releases a list of the top ten most frequently challenged books for that year. Further down on that page, there are more lists of banned books and the reasons why they are banned. (Check out this list put out by the CBLDF for Banned Books Week 2015 that lists 12 Challenged & Banned YA Graphic Novels.) In these descriptions, you will find references to the Comic Book Legal Defense Fund, the CBLDF, a non-profit organization that posts cases on their website of comic books that have been challenged, censored, banned, etc. 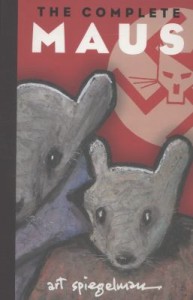 In Maus, Art Spiegelman writes about the struggles of Vladek Spiegelman, a Jewish survivor of Hitler’s regime, and his son, a cartoonist who is struggling to work with the story of his aging father. Going on around the backdrop of guilt and survival are also the things that happen in normal day-to-day life: the stories of unhappiness, routine, and squabbles that we all live through. In one part, the son is interviewing his dad about his experiences. In another part, Spiegelman is interpreting his father’s life as a graphic novel, which each different race being depicted as a different animal. This Pulitzer Prize winning graphic novel has been challenged for being “anti-ethnic” and “unsuitable for younger readers”. It has also been removed from shelves in foreign countries for having a Nazi swastika on the cover. 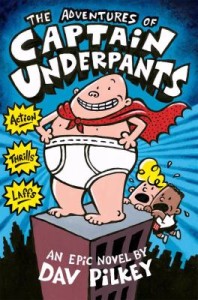 The Adventures of Captain Underpants by Dav Pilkey is a frequently banned/challenged series(the cover shown being the first in the series), so much so that it is number 13 on the top 100 list of banned/challenged books for 2000-2009. It has even been number 1 on the top 10 lists for many years. It is often challenged and/or banned for offensive language, anti-family content, sexually explicit, violence, or being unsuited for age group. In this book, Harold and George often get into hijinks that include turning their principal, Mr. Krupp, into Captain Underpants, so that he can defeat some kind of nefarious evil-doer that has descended upon the school. In case you are wondering why this book is featured on the graphic novel list, this book is filled with pictures and the boys are also working on their own comic strip, which sometimes takes up chunks of the book. 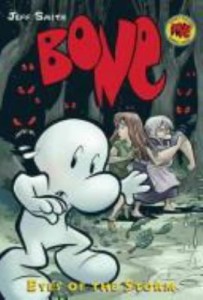 Jeff Smith created Bone, a series of graphic novels, which, in the first of the series shown to the left, chronicles the lifes of three Bone cousins, Fone Bone, Phoney Bone, and Smiley Bone after they are run out of Boneville, their home, and are forced to find their way in a desert and then a subsequent valley. Smith spins humor, mystery, and adventure together into this story that people who have left home for the first time, people reminiscing, and especially kids will relate to as the Bones realize that everything now around them is totally different, overwhelming, and, of course, strange. The Bone series found itself on the top 10 list of frequently challenged books in 2013 for the following reasons: “political viewpoint, racism, and violence”. 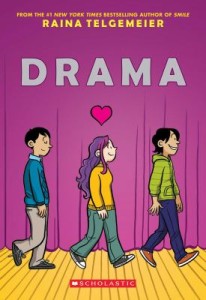 Raina Telgemeier has written many graphic novels that center around this age, but the one that causes the most issues in terms of banning and challenging is Drama. In this graphic novel, Callie, the main character, loves theater, but to her chagrin, she can’t sing. She is made set designer for this year’s production and has decided that this set for her middle school’s production of Moon over Mississippi is going to look amazing! As she is dealing with everything to do with the play, Callie also finds herself having to deal with the offstage and onstage drama generated by the actors that are chosen for the play. All around her relationships begin and end, while some fail to even start. This award-winning graphic novel was recently on the top ten list for 2014 for being “sexually explicit” and has also been challenged because of the inclusion of two gay characters. 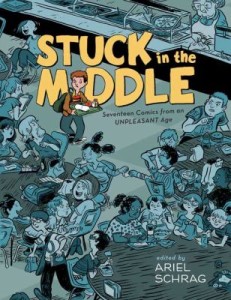 While the following book has yet to crack the top ten frequently challenged book lists, it has been pulled and challenged in libraries across the country. Stuck in the Middle: Seventeen Comics from an Unpleasant Age is a collection put together from a wide variety of cartoonists detailing their own times in middle school. The point of this book is to show that while middle school and being thirteen is incredibly awkward and unpleasant, you will survive! The authors in this graphic novel are not afraid to deal with the nitty, gritty, uncomfortable topics that happen throughout middle school. This book has been pulled from two South Dakota middle schools and has been challenged in other towns as well for the following reasons: objectionable sexual, language, drug, and alcohol references. A few libraries allowed the book to be retained, but placed it in the professional collection, which requires students to obtain parental permission before they are allowed to check it out. 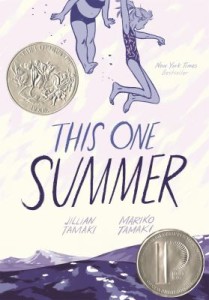 Jillian and Mariko Tamiko created this New York times bestseller, Printz award Honor Book for excellence in young adult literature, and Caldecott Honor Book in 2014. This One Summer is about the story of Rose, whose family has vacationed at Awago Beach for as long as she can remember. There she is able to escape all of her troubles and truly slip into her refuge and summer getaway spot. Windy, her friend, is there as well, filling in as the little sister that Rose never had. Everything is perfect until this summer when Rose’s parents keep fighting, Rose notices that Windy is childish, and rose and Windy get things entangled in the drama of the older kids on the island. This graphic novel has been challenged for “age-inappropriate content”, an ultimate misinterpretation of the age requirements for the Caldecott Award, which is for books aimed at kids 14 and under, while This One Summer is aimed at kids 12+. 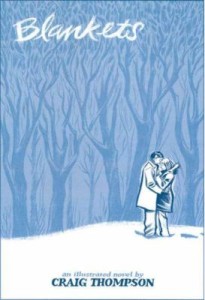 Craig Thompson wrote Blankets, a semi-autobiographical journey into his relationship with his brother, Phil, who he had to share a blanket with when he was younger, and his first girlfriend, Raina, who he also shared a blanket with. This graphic novel works to tell two entwined stories by flashing back to early experiences in Craig’s life while also pairing them with things that he is experiencing right now. This book dives into Craig’s upbringing in a religious family, how he handles his first love who he meets at a church camp, and also how he comes to terms with his religious beliefs as his life makes a whole bunch of changes. Raina’s family brings the added complication of Down Syndrome to their relationship while her parents are also dealing with a divorce. This book has been challenged because of allegedly obsence illustrations, depictions of sex and human body parts, inappropriate subject matter, and that the comic artwork would attract children who would then see the “pornographic” images. 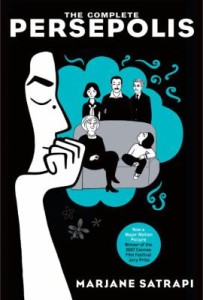 Marjane Satrapi wrote the award-winning graphic memoir, Persepolis, about her struggles growing up in Tehran. Marji spent most of her childhood growing up in a family not short on live during the Islamist Revolution. She quickly had to learn how to manage her private vs. her public life in Tehran. As her family encouraged her to speak her mind, she often landed in trouble, forcing her parents to ship her off to school in Austria. In Vienna, Marji dealt with her adolescence away from her family, only to return home to face both the good and the bad. In the end, she self-imposed an exile upon herself when she became a young adult. This graphic memoir was number 2 on the top ten list of 2014 and has been banned and challenged for many reasons: gambling, offensive language, political viewpoint, graphic depictions, and also politically, racially, and socially offensive.

Here are some news articles that talk about Persepolis being banned. Many more are out there as well. 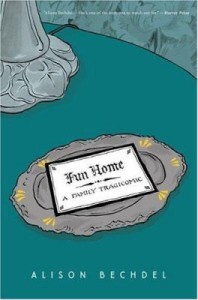 Now we’ve arrived at the graphic novel that has been ripping up the headlines recently in terms of people trying to ban it. Fun Home by Alison Bechdel is an autobiographical memoir that deals with Bechdel’s everyday life in an unnerving and darkly funny story about her family. Alison’s father, a man of many different talents and jobs, is a distant parent and a closeted homosexual. Alison yearns for her father, but as the stories or her brother and her running rampant through the “fun home,” also known as the funeral home, can attest, their relationship works through their sharing books. This book has been banned/challenged for LGBTQ themes and morality themes. 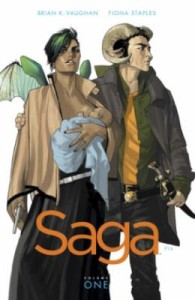 Saga by Brian K. Vaughan and Fiona Staples is a sort of modern retelling of Romeo and Juliet. Alana, a winged soldier from planet Windfall, and Marko, a horned former prisoner of war from Landfall’s moon, are both on the run from their respective militaries. They escaped to give birth to their daughter, but now everyone wants them dead. Sheer luck seems to be the only way the family has survived and managed to escape into the galaxy. The Saga series is number 6 on the list of top ten most frequently challenged books of 2014 and was banned for the following reasons in 2014: anti-family, nudity, offensive language, sexually explicit, and unsuited for age group. 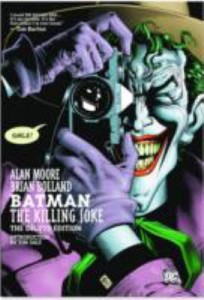 You may be wondering why there aren’t any superhero graphic novels on this list. Let me introduce to you Alan Moore’s Batman: The Killing Joke with Brian Bolland as the illustrator. This graphic novel was released as a a stand-alone by DC Comics in 1988. In this graphic novel, Bolland depicts the Joker’s brutal torture of Jim Gordon and his daughter Barbara. The psychological and physical damage done upon Gordon and Barbara are illustrated perfectly in this graphic novel and prove to forever alter the continuity of DC’s Batman universe as the shooting of Barbara Gordon leaves her paralyzed and ultimately leads her to becoming the Oracle. Alan Moore has had many graphic novels challenged/banned and Batman: The Killing Joke followed for the following reasons: it “advocates rape and violence”. 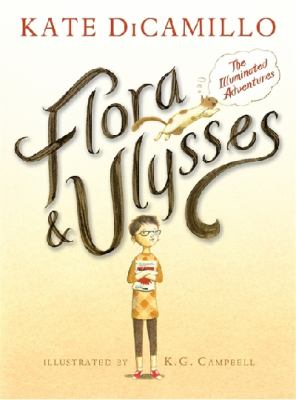 Flora and Ulysses by Kate DiCamillo is delightful!  I was smitten with this charming, smart middle grade novel from page one.  DiCamillo (Tale of Despereaux, Because of Winn Dixie) is joined by illustrator K.G. Campbell to bring to life Flora Belle Buckman, a natural-born cynic in the body of a tween girl.  Armed with an extensive vocabulary, an abundance of comic book knowledge, and an eye for the truth, Flora makes for a wonderful heroine.

But she wouldn’t see herself as the hero of this tale.  The hero (I mean, superhero) is Ulysses, a squirrel who acquires the abilities to write poetry and fly after being sucked up by Flora’s neighbor Tootie Tickman’s  Ulysses Super-Suction, Mult-Terrain 2000X vacuum.  The story that follows includes a terrifying cat, temporary blindness, a shepherdess lamp, an unexpected villain, a giant doughnut, and much more.

While this comic book/chapter book hybrid is funny and silly, it is also very sweet.  The examination of changing mother-daughter dynamics as girls grow up is so beautifully executed and subtle that readers may not notice it until they’ve finished reading.  Flora and Ulysses is a great read for loyal readers of Kate DiCamillo and fans of Liar and Spy by Rebecca Stead and Fortunately, the Milk by Neil Gaiman (or, really, anyone!)

Bad Behavior has blocked 1420 access attempts in the last 7 days.