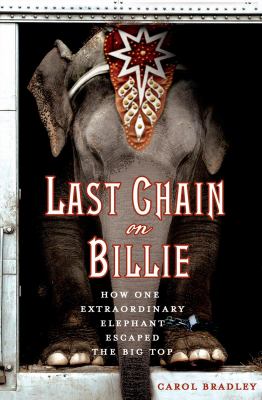 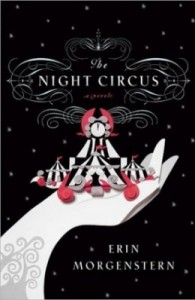 The Night Circus by Erin Morgenstern has become one of the most buzzed-about books of the year, and with good reason.  Set in the late 1800s, it is the story of a boy named Marco and a girl named Celia who are bound in a competition that they don’t truly understand, but they know that it will involve using the magical abilities that both show at a young age.  They spend their young lives being trained by instructors whose methods differ greatly until the time comes for the challenge to begin.  For this purpose, a venue is created:  a stunning, mysterious black-and-white circus that travels constantly and only operates at night, called Les Cirque des Reves.  It is like no other circus you have ever seen, complete with a fortune teller, an illusionist, acrobats, the most delicious food you can imagine, and tents filled with landscapes that will take your breath away.  The two spend years using their abilities to make alterations to the circus, constantly one-upping each other as they grow more and more aware that the consequences could be dire.  Especially once they realize their true feelings for one another. 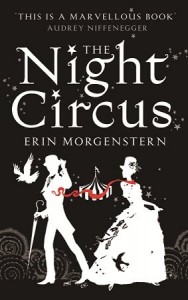 The story is told through multiple points of view all while bouncing around in time to different points in the lifespan of the circus.  Initially this can make it a little hard to follow exactly when and where everything is happening, but once you catch onto the flow of it, this makes the story more complete and layered.  The focus of the story isn’t just on Celia and Marco, but on all the supporting circus folk as well.  In fact, the part of the story I found most compelling was the story of Bailey, a boy who becomes enthralled with the circus at a young age and waits for years for it to come back.  Eventually he befriends two of the circus performers and find his fate intertwined with that of the circus in a way he never expected.  But my absolute favorite thing about the book is how beautifully it is written.  The language is absolutely lovely and creates the most vivid and uniquely beautiful pictures in the reader’s head.  I don’t even want to describe any of it to you because part of the fun of the book is discovering new parts of the circus as Celia and Marco make their alterations!  Morgenstern creates a very sensory experience; you can see, hear, smell, and taste the circus as though it is going on all around you.

Making my expereince with The Night Circus even better, I listened to the audio version read by the amazing Jim Dale (narrator of the Harry Potter audio books).  He really brings the characters to life, and his narration makes this already beautifully-written book even more magical.  If you like magic, romance, and very vivid reading experiences, I highly recommend picking up this incredibly enchanting novel. 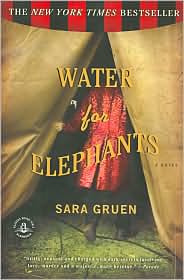 I’m amazed how many folks haven’t read this yet. I guarantee you will not be anything but fascinated and thoroughly entertained by Sara Gruen’s Water for Elephants.

This story is about young Jacob’s interlude with the circus during the Depression and Prohibition. Fascinating are the circus days of old – truly a culture in and of itself. Entertaining are the diverse characters – from ringmasters and those in the side shows to the roustabouts and the star of the circus – Rosie the elephant. The story is reminisced by Jacob in his elder years. Gruen’s descriptions and story developments are fantastic. You can feel Jacob’s passion in youth and fearful frustration in old age. There is romance and murder; tragedy and hope. Best of all, it has a great ending.