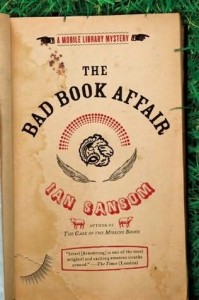 The Bad Book Affair by Ian Sansom is a light, easy-read mystery is a novel choice for National Library Week.  There’s a lot of dialog (maybe too much at times) but since it takes place in Northern Ireland, I guess it’s reasonable to espect a bit of blarney or wit-repartee.  Enter Israel Armstrong, the primary character, now living in a converted chicken coop, and according to the first sentence is” possibly Ireland’s only English Jewish vegetarian mobile librarian.”

Israel is depressed; his girlfriend Gloria has just broken up with him, he’s about to turn 30, and he’s under suspicion in the disappearance of a local teenager.  Some consider him responsible because (horror of horrors) he lent the girl a book from the library’s special “Unshelved” collection.  Rather than be run out of town, he hops in the library van and does his own research, of sorts.  Israel, in his frumpy cords and rather slovenly ways, is a very unlikely detective, but much of the humor comes from this self-effacing characterization.  This is not classic literature, but book-lovers, especially, will find some good laughs.

You may have noticed that many librarians have a love affair with Audrey Niffenegger’s The Time Traveler’s Wife (case in point, Lynn just blogged about it and here I am blogging about it again). This is mostly due to the book’s bookiness–it is swelling with libraries, librarians, book artists and historical typefaces. Lucky for us, Ms. Niffenegger seems to have a love affair with Libraries, and thus continued her theme of bookiness in a graphic story titled The Night Bookmobile published in The Guardian last Autumn. The story revolves around a young woman who stumbles onto a bookmobile that holds every bibliofile’s deepest desire and a very personal collection of books: 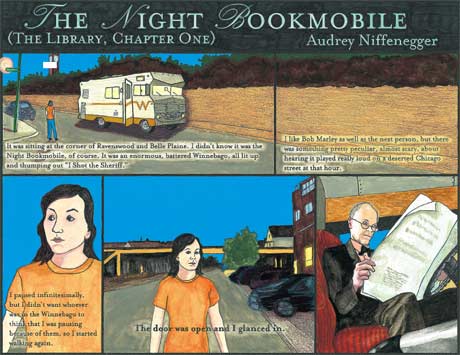 You can find out what magic this bookmobile holds by reading it online via The Guardian or keeping your fingers crossed that a book version will be published in the US next fall!

P.S. Audrey Niffenegger’s newest novel, Her Fearful Symmetry, comes out at the end of September so better hurry and get your reserve on it!