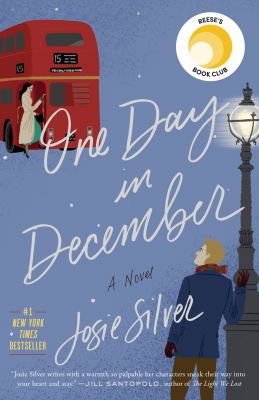 This book caught my eye when it popped up as a Reese Witherspoon x Hello Sunshine Book Club Pick. Seeing that there was a wait list, I decided to hold out and wait until it came out on OverDrive. Just this last week, I stumbled upon this title again as available. I hurriedly checked it out and started reading. I devoured this title in less than two days!

One Day in December by Josie Silver may be in the fiction section, but it definitely is full of romance as two of the main characters feel the constant push and pull of attraction throughout their lives over a ten year history.

Laurie is on her way home when she spots a mysterious man at a bus stop. Through the foggy and misty window on the blustery snowy December day, Laurie is floored by the instant attraction that courses through her. When he lifts his head up and their eyes meet, something jolts through her body and she knows that he is the one for her. Stymied by indecision, Laurie is at a loss of what to do. Just as she’s gathering her courage, her bus drives away.

Thoroughly believing that she and bus boy are fated to find each other again, Laurie and her best friend Sarah spend the next year scouring every conceivable place in London looking for him. She becomes even more obsessed thinking that she sees him in crowds, in cafes, at different bus stops, anywhere and everywhere. Her journey to find bus boy comes to a screeching halt at their annual Christmas party when Sarah finally brings her new boyfriend to show off for Laurie. As they are introduced, Laurie feels that jolt pass through her again. The man that Sarah has been gushing about for months is Jack. Jack is bus boy. Laurie is understandably devastated.

Not wanting to destroy Sarah’s happiness, Laurie and Jack enter into an unspeaking pact to never tell Sarah that the two have met before. As a result, Laurie, Sarah, and Jack live the next ten years somewhat normally. They go through heartbreaks, intense friendships, new romances, family troubles, and new careers, all while fate works behind the scenes to guide them where they need to be.

Told through snippets of different days throughout the ten years that pass after Laurie first saw Jack, One Day in December tells the story of how love changes and morphs as we grow older. While Laurie may not believe in love at first sight, this novel works to prove that fate has a hand in every decision that we make and ultimately will lead us towards happiness in many different forms.