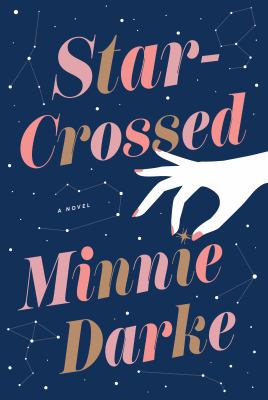 Do you read your star signs? Do you follow what your stars tell you? I’ll admit I sometimes check my star sign (Gemini over here), but it’s not something I do every day. None of my friends really live by their astrological signs either, so when I read Minnie Darke’s debut novel, Star-Crossed, I was pleased to see that I was going to be learning more about horoscopes throughout this novel.

Star-Crossed by Minnie Darke tells the story of childhood sweethearts Justine and Nick. Justine is a major skeptic and a Sagittarius, while Nick is an Aquarius  and an astrological devotee. Specifically Nick is a true believer and follower of the horoscopes by his favorite astrologer in a local magazine. After bumping into each other, Justine realizes that Nick’s favorite astrologer works for the same paper that she works for! Moving up as a coffee runner, Justine finds herself with more responsibilities at the newspaper. One of those responsibilities: inputting in the horoscopes for each issue.

Justine and Nick continuously run into each other, leading Justine to believe that the two will eventually fall in love with each other. Nick’s actions continuously prove otherwise. He IS NOT falling in love with Justine. Feeling torn up about this, Justine decides to tweak his horoscope in order to lean Nick more towards her loving arms. By changing Aquarius, Justine is changing fate. What Justine fails to realize is that Nick is not the only astrological devotee of her newspaper. Other Aquarius are making very important life decisions and changes based on Justine’s new horoscopes.

This novel takes fate and destiny and turns them upside down by charting Justine’s meddling throughout months of the newspaper’s horoscopes. By discussing horoscopes, Darke shows readers how going through life on your own is overwhelming, so finding friendship and help through the stars helps people make choices that are hard to figure out when it feels like you are alone.

Bad Behavior has blocked 1334 access attempts in the last 7 days.