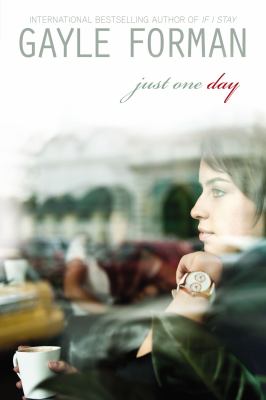 I’m pretty sure that if a cute stranger offered to take me to a romantic European city for the day, I would probably say “No, but thank you. I’m just too awkward for that.” And I wouldn’t even fret about possibly missing out on an experience of a lifetime because, luckily, there are plenty of young adult romances that can satisfy my “but what would have happened?!” curiosity. Just One Day by Gayle Forman (and its companion book, Just One Year) is the perfect choice for armchair travel because the heroine just happens to be quite introverted herself, and thus, very relatable to us classic Librarian-types 😉

Just One Day begins with sensible, quiet Allyson feeling ready for her graduation trip around Europe with a teen tour group to be over so she can go home to the States. Yeah, that whining-about-being-in-Europe part isn’t that relatable to me, but granted her best friend has gotten a little bit wild/annoying, and the tour skipped over Paris–the one city Allyson wanted to see on the tour. But then she runs into a cute street actor who had flirted with her during his performance the night before…AND HE OFFERS TO TAKE HER TO PARIS! YES! YES! YES! So Allyson tells him her name is Lulu and hops on the train to Paris with him (and then promptly has several panic attacks on the train about him leaving her, killing her, making a fool of her, etc–this is actually the moment where I went from liking the book to LOVING the book). Lulu/Allyson and Willem spend an amazing day running around Paris and then live happily ever after. Swooooooon.

Well, until the next morning when Allyson wakes up alone in an empty Paris art studio. 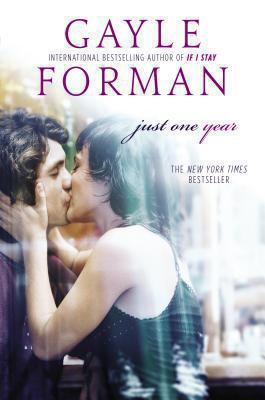 With lots of tears and panic, Allyson finds her way back to London and her tour group and then back home to the United States. We then follow her through her first year of college as she learns to overcome her broken heart and embarrassment. After a long self-inflicted isolation, new friends help Allyson discover that she needs to revisit Paris and find Willem–partly because she believes that there is a mystery surrounding the morning Willem left her and partly because she needs to prove to herself that she is in control of her life.

Sorry, I can’t tell you if she finds Willem…BUT I will tell you that the companion book Just One Year tells the story of what happened to Willem during his year apart from Lulu. He does quite a bit more traveling…that is all I will say.

These two books are a must read for fans of Stephanie Perkins, John Green and Maureen Johnson and anyone else who likes a little independence and a little travel with their romances. 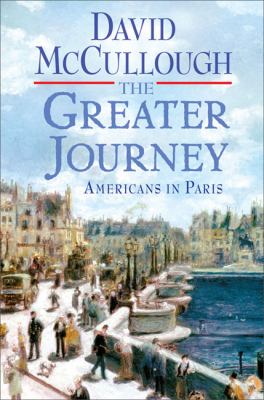 The Greater Journey is the enthralling, inspiring – and until now, untold – story of the adventurous American artists, writers, doctors, politicians, architects, and others of high aspiration who set off for Paris in the years between 1830 and 1900, ambitious to excel in their work. After risking the hazardous journey across the Atlantic, these Americans embarked on a greater journey in the City of Light. Most had never left home, never experienced a different culture. None had any guarantee of success. That they achieved so much for themselves and their country profoundly altered American history. As David McCullough writes, “Not all pioneers went west.”

Elizabeth Blackwell, the first female doctor in America, was one of this intrepid band. Another was Charles Sumner, who enrolled at the Sorbonne because of a burning desire to know more about everything. There he saw black students with the same ambition he had, and when he returned home, he would become the most powerful, unyielding voice for abolition in the U.S. Senate, almost at the cost of his life. Two staunch friends, James Fenimore Cooper and Samuel F. B. Morse, worked unrelentingly every day in Paris, Cooper writing and Morse painting what would be his masterpiece. From something he saw in France, Morse would also bring home his momentous idea for the telegraph. Pianist Louis Moreau Gottschalk from New Orleans launched his spectacular career performing in Paris at age 15. George P. A. Healy, who had almost no money and little education, took the gamble of a lifetime and with no prospects whatsoever in Paris became one of the most celebrated portrait painters of the day. Medical student Oliver Wendell Holmes wrote home of his toil and the exhilaration in “being at the center of things” in what was then the medical capital of the world. From all they learned in Paris, Holmes and his fellow “medicals” were to exert lasting influence on the profession of medicine in the United States. Writers Ralph Waldo Emerson, Nathaniel Hawthorne, Mark Twain, and Henry James were all “discovering” Paris, marveling at the treasures in the Louvre, or out with the Sunday throngs strolling the city’s boulevards and gardens. Almost forgotten today, the heroic American ambassador Elihu Washburne bravely remained at his post through the Franco-Prussian War, the long Siege of Paris and even more atrocious nightmare of the Commune. His vivid account in his diary of the starvation and suffering endured by the people of Paris (drawn on here for the first time) is one readers will never forget. The genius of sculptor Augustus Saint-Gaudens, the son of an immigrant shoemaker, and of painters Mary Cassatt and John Singer Sargent, three of the greatest American artists ever, would flourish in Paris, inspired by the examples of brilliant French masters, and by Paris itself.

Nearly all of these Americans, whatever their troubles learning French, their spells of homesickness, and their suffering in the raw cold winters by the Seine, spent many of the happiest days and nights of their lives in Paris. McCullough tells this sweeping, fascinating story with power and intimacy, bringing us into the lives of remarkable men and women who, in Saint-Gaudens’s phrase, longed “to soar into the blue.” The Greater Journey is itself a masterpiece. (description from publisher)