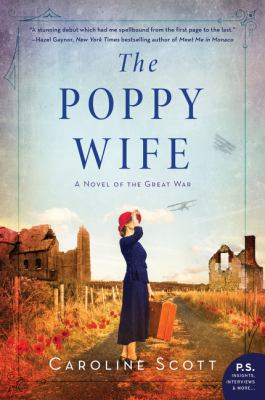 Edie believes her husband Francis died in 1918 in a horrific battle near the end of World War I when he is declared “missing, presumed killed”. But in 1921 she receives a photo of Francis in the mail with no letter or return address and she begins to wonder if he made it out alive and is waiting for her. She contacts Francis’s brother Harry, and asks him to help her, to either find Francis or find his grave.

Harry, who was with Francis when he was wounded, does not believe Francis is still alive, but he is in love with Edie and will do what he can to help. Harry has been working as a photographer, taking pictures of graves and battle-sites for grieving families back in England and he understands just how chaotic and devastated the French and Belgium countryside is – entire villages have completely disappeared, while others struggle to rebuild, fields are littered with shells and mortar and bones and whole forests are nothing but burned and broken stumps.

Returning to the places that Harry and Francis (and Will, their younger brother who was killed early in the war) fought is difficult for Harry as he is flooded with memories of what they had been, what they went through and what happened to them. It is obvious that Harry is suffering from what we now call PTSD but that he is coping and that Francis also suffered and was broken by the war. In addition, Harry is burdened with the fact that he has been in love with Edie for years and, while nothing happened between Harry and Edie, Francis cannot forgive him.

Edie and Harry, traveling both together and separately, meet a wide range of people suffering in the aftermath of the war – widows and families searching for lost soldiers (many that died were never identified or found) trying to find closure with a grave or memorial, veterans haunted by what they had witnessed, ordinary people struggling to survive.

The Poppy Wife paints an unapologetic portrait of “the Great War” and it’s devastating and long-reaching affects. The chapters move between the three brothers during the war and Harry and Edie’s search for Francis in 1921. Scott’s writing is calm and collected, almost poetic, but the horror and senselessness of what happened on those foreign fields is never far from the surface. And it is nearly impossible to put down as the tension and mystery builds. Highly recommended.

If you are interested in learning more about this time period, I highly recommend Vera Brittan’s Testament of Youth (which is not fiction but actually happened to her) which has been made into a mini-series, to watch A Very Long Engagement starring Audrey Tautou, and Peter Jackson’s brilliant documentary They Shall Not Grow Old in which footage from the war has been remastered, bringing the time vividly to life.