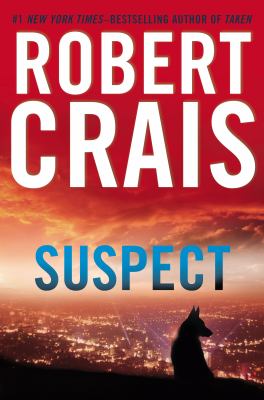 Scott and Maggie are new partners in the LAPD but they have a lot more than that in common – both are a mess after barely surviving brutal attacks that left their former partners dead, both suffer from severe PTSD and both are close to unfit for duty. The fact that Scott is a human and Maggie is a dog does not change that fact that they are just what the other needs in Suspect by Robert Crais.

Officer Scott James has just returned to work, still physically recovering from gunshot wounds that have forced him to give up his goal of joining the elite SWAT squad. He is haunted by memories of the night of the attack, when masked gunmen launched a surprise attack on a passing car, then turned on Scott and his partner when they tried to stop them. The cries of his dying partner calling for him as he lay helpless as his own life nearly bled out, rerun in his dreams every night. Desperate to find justice for his partner, he refuses a medical discharge and finds a position in the K-9 Unit where, he believes, he won’t have to worry letting down a partner again.

Maggie has survived three tours of Iran and Afghanistan, saving hundreds of grunts with her IED sniffing talent until a suicide bomber kills her handler and snipers nearly kill her when she refuses to stop guarding his body; the Marines are only able to drag her away by throwing a jacket over her and manhandling her into the rescuing helicopter. No longer able to serve in the military and wary and suspicious of everyone, the LAPD may be Maggie’s last chance.

Award-winning author Robert Crais  (best known for his Elvis Cole mysteries) is a master storyteller, showing how these two damaged beings fight back and help and learn from each other using language that is lean yet evocative – you can feel the heat of Los Angeles, the terror of Scott’s panic attacks, Maggie’s joy as she accepts Scott. The information about the training and deployment of police and military dogs is fascinating but never overwhelms the story and the final chapters, where Scott and Maggie work together to bring Scott’s attacker’s to justice, are tense and action-packed.