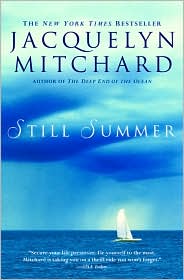 close friends, Tracy, Olivia, Holly and Janis who met years earlier at St. Ursula’s High School, decide to reunite by taking a relaxing trip to the Caribbean in Jacquelyn Mitchard’s Still Summer.   At the last minute Janis cancels due to the health of her husband, so Tracy invites her nineteen year old daughter, Cammie, in the hope to salvage their fragile relationship.  After boarding a private yacht, complete with the two person crew of Lenny and Michel to navigate the waters, they set sail on their journey upon the Opus.

In the early days of their journey, Cammie develops a relationship with the young and handsome co-captain, Michel, much to the chagrin of her mother, Tracy.  When Michel and Cammie set off for a secluded part of the beach, they are discovered and head back to Opus to suffer the consequences.  When trying to dock with the boat a tragic accident ensues with both Lenny and Michel falling overboard and the women don’t know if they are dead or alive.  Quickly the foursome realize they are alone on the boat – now without a working engine.

Soon thereafter, they are discovered by a trio of modern day pirates – with deadly results.  Still Summer captures some of the turmoil between these women held over from their youth  as well as the desperation of trying to survive on the open sea.  I listened to the audiobook version of Still Summer, which made for a suspenseful and emotional journey of survival and what it means to live a fulfilling life.