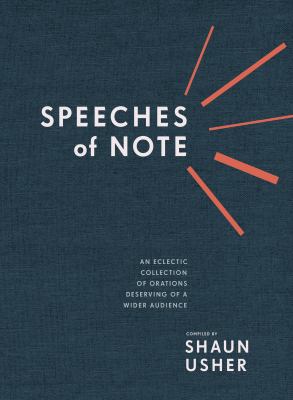 “Speeches of note: an eclectic collection of orations deserving of a wider audience“ – compiled by Shaun Usher (is) “An illustrated collection of 80 of history’s most interesting, profound, and sometimes unknown speeches from a range of scintillating personalities such as Winston Churchill, Maya Angelou, Barack Obama, Abraham Lincoln, Groucho Marx, and Tina Fey”– Provided by publisher.

This is an incredible compilation of speeches. Definitely worth your time to read. Highly recommend this book for anyone lacking inspiration in their life or in need of the greater element of the human spirit that we only sometimes exude – if ever. All the speeches in this book are….and no understatement here…..incredible. I especially enjoyed: President Theodore Roosevelt’s speech in 1912 after just having been shot….he went on to give his speech and said, “Friends, I shall ask you to be as quiet as possible. I don’t know whether you fully understand that I have just been shot—but it takes more than that to kill a Bull Moose.” – seriously??? do you know of any politician who would go on today to give a speech for an hour and thirty minutes after just having been shot??? this is madness and no….I mean wow…this man…too bad he was not elected again in 1912 just think of what more he could have done – as we have him to thank in part for the United States National Park Service and protected lands through his conservationist actions.; Meghan Markle gave a beautiful speech on gender equality in 2015 to the United Nations (UN) on International Women’s Day; Malala Yousafzai’s first ever public speech at the UN which called for worldwide access to education; Donovan Livingston, a Master of Education graduate student, made a beautiful, verging on poetic, speech that echoed the need for change for students of color calling on all teachers and faculty to be that change – his speech created tremors  throughout the world via the internet giving Livingston instant international acclaim; and lastly, Anna Quindlen’s commencement speech that was never delivered….and..it made me cry. Check out this book. It is incredibly wonderful, inspiring, and moving.

Bad Behavior has blocked 1334 access attempts in the last 7 days.