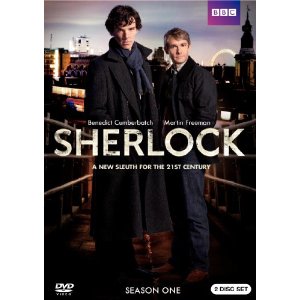 Sherlock Holmes comes to the 21st century in the new BBC series Sherlock. Consulted reluctantly by the police, Holmes is brilliant, sarcastic and socially awkward. Watson, a military doctor that has just returned from Afghanistan after being wounded, is not the bumbling fool so often portrayed in film but is an equal partner in the detective work and also serves as a moral compass for Holmes.

The familiar framework remains, just tweaked in places for the modern setting. Thus, the deerstalker becomes a scarf, Watson keeps a blog rather than a journal, London atmosphere comes from a skyline that includes the Millenium Wheel and the Gherkin building rather than foggy, cobblestone streets and Holmes finds his informants among the homeless rather than street children. What doesn’t change, however, is the brilliant Holmes – socially misfit, actively disliked by many, hyper intelligent.

As you would expect from the BBC, the production values are excellent. Filming on location in London lends authentic atmosphere; the writing is sharp and witty with many homages to the Arthur Conan Doyle originals; and the acting is outstanding. The only negative? There are only three episodes. However, the series proved to be so popular in England that they are currently filming three more episodes – watch for them on PBS in the fall.

Whether you’re new to Sherlock Holmes, or longtime fan you’re sure to enjoy this fun new series.

One thought on “Sherlock, Season One”