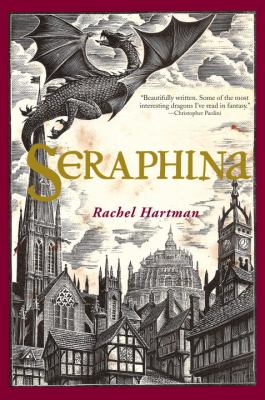 Rachel Hartman’s Seraphina is my new favorite book of dragon fantasy. In it, dragons – an unfeeling, coldly mathematical species which can fold themselves into human shape – have shared an uneasy peace with Seraphina’s homeland of Goredd for 40 years. Prejudice and naked hatred between the two races exists everywhere, and on the eve of the peace treaty’s fortieth anniversary, tensions are running high. Add to this mix a murdered prince (whose missing head strongly suggests dragon involvement) and a smart, curious young woman with a unique ability to understand dragon culture and you have a recipe for intrigue. Seraphina is a gifted musician and the assistant to the court composer, which makes her a minor member of the royal court. Her talent is making her famous, but she has secrets to keep; preserving those secrets while at the same time investigating a royal murder and befriending the presumptive heirs (Princess Glisselda and her fiancé, the bastard Prince Lucian) puts Seraphina in a lot of tight spots. Her friends; her life; her sanity; her secrets – what will Seraphina sacrifice to protect the peace?

I have no complaints about this novel; it’s perfectly paced, gorgeously written, and well imagined, all of which shines through a multi-layered and complicated plot that never gets out of Hartman’s control. The characters are inspirational in their intelligence and bravery yet relatable in their worries and failures. There’s intrigue and mystery as well as philosophy and breathless action, and even a bit of romance. Seraphina’s romance with Lucian is wonderfully subtle and genuine – a true meeting of the minds. Hartman is so busy writing about their meaningful conversations and compatible personalities that I’m not even sure I know what Lucian looks like! Seraphina has more important things to think about than the color of his eyes.

Bad Behavior has blocked 1691 access attempts in the last 7 days.