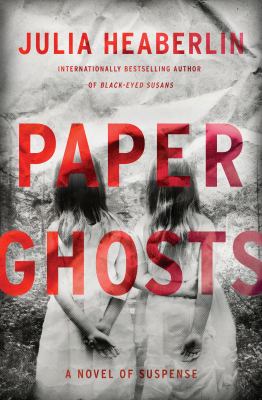 Finding old black and white photographs hidden in drawers or on the shelves of antique stores is one of my favorite things. Those photographs seldom have identifying information on the back. As a result, my mind will wander and make up stories about whoever happens to be in the shot. When I stumbled upon my last read, I knew it was meant to be, based purely on the cover. When I read the description, I was even more hooked.

Paper Ghosts by Julia Heaberlin is a mysterious murder plot of a book. Carl Louis Feldman is a documentary photographer living in a home for suspected serial killers who have mental issues. It’s thought that Carl has dementia. Certainly all the symptoms point to it, but the fact that Carl is not in prison at the moment for his crimes leads a mysterious young woman searching for answers to his doorstep.

This young woman has been obsessively searching for answers to her sister’s disappearance since she was twelve years old. She has been waiting to meet Carl and has planned, researched, and trained in every way possible. Showing up where Carl lives and breaking him out of the home is the easiest part. Now she and Carl are traveling across Texas to three red dots marked on her map as she works to see whether or not Carl is guilty of murdering all these women and of kidnapping and murdering her own sister.

Carl might be a serial killer. He might have dementia. He might not remember committing a string of violent crimes across Texas that match up with a series of famous photographs he took. This woman doesn’t believe anything Carl says and hopes that this road trip will help her figure out the truth about Carl and what happened to her sister.

This novel could have gone many different ways. I found myself constantly wondering what was going to happen to Carl and this mysterious young woman. Was he faking? Was she going to kill him? Would either of them ever find answers? I was hooked cover to cover. Give it a read and let me know what you think.