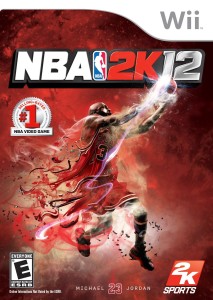 One of the favorites to be played in my house is NBA 2K12. The NBA 2K series lets you utilize real player rankings and press conferences to talk up the rankings of your player(ie. get more endorsements, money, and a better draft spot), learn who the famous players were that year and in previous years, and even learn more about how basketball statistics work. The 2K12 version of this game allows you to pick from the greatest NBA teams of all time and even lets you see the rosters, which show the players who were actually playing during that time. If you’re more interested in the current players, the previous years’ rosters have all been included as well.

Don’t have a Wii and are looking for this game in a different platform? Or maybe you’re looking for a more up-to-date version of this game with more current players? If yes, then head to the library catalog and search “nba 2k*” and that will pull up results for the other versions of this game, (for example: NBA 2K13, NBA 2K14, and NBA 2K15), as well as different platforms: Wii, Playstation 3, Xbox 360, and Playstation 4. Any questions? Visit or call the library and our reference librarians call help you.