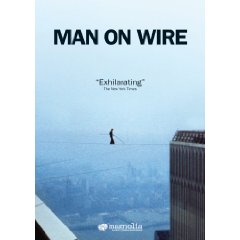 From the first time Frenchman Philippe Petit read about the Twin Towers (while they were still being built) he dreamed of walking on a high-wire strung between the buildings. On August 7, 1974 his dream became a reality. Man on Wire recounts the great adventure that Philippe and his friends went on – the hard work, the determination and training, the massive organizing and sheer skill and beauty of the act of high-wire walking.

Footage from Philippe’s personal collection are integrated into what becomes a riveting and often tense story of exactly how this illegal (“but not wicked or mean”) act is pulled off. Philippe begins by setting up practice wires in a field near his home in France. As warm-ups to the Twin Towers, he walks a high-wire between the towers of Notre Dame and then between the towers of Sydney’s Harbour Bridge (with the famous Opera House in the background) Planning the Twin Towers walk took many months; still under construction and only partially occupied, Philippe spent many hours studying how to enter the building with nearly a ton of equipment, what the roofs were like, where would be the best places to anchor the wire.

The night before the walk, Philippe and friends entered the Towers, one team in each building. Both teams had close encounters with guards and equipment problems (imagine for a minute how they got that wire from one building to the other!) The morning dawns misty and foggy, but Philippe never hesitates; he spends nearly an hour on the wire, dancing, saluting the crowd, even laying down, all on a wire suspended nearly a quarter of a mile in the air.

There is an undercurrent of sadness here as well; friendships strained by the white hot passion of a single-minded obsession fade and break. Present-day interviews of the participants show how much they still care and how this adventure profoundly affected their lives. Even more poignant – not once are the events of 9/11 mentioned, nor the fact that the Towers no longer exsit. This lovely, touching documentary stands as a tribute to the lost Towers and the dreams they generated.

One thought on “Man on Wire”