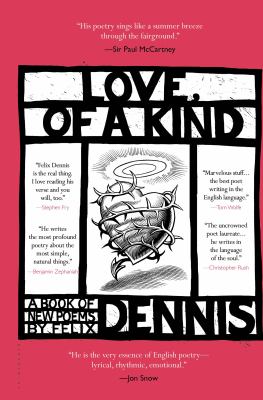 Love, of a Kind is the seventh book of poetry put together by Felix Dennis. Dennis was diagnosed with throat cancer in January 2012. As a result of that diagnosis, he began bringing together and revising poems for what he believed to be his last book. The poems here run along the themes of pain, life, death, and love.

The author lived a fairly loud and extravagant life after a humble beginning. Dennis was born and lived a life of poverty in a south London suburb where he dealt with his father moving to Australia, his mother choosing not to follow, and their subsequent divorce in a time where divorces just did not happen. As a consequence of their divorce, Dennis’ mother chose to not let her previous failed marriage be a reason for her or her children to not succeed in life. Dennis’ career spanned from publisher to poet to spoken word performer to philanthropist. Never one to stray from the limelight, various interviews with Dennis can be found online.

After his diagnosis in 2012, Dennis created Love, of a Kind as a way to cope. Dennis pairs his poems with woodcut engravings that help pull readers more completely into his world. Read along and feel Dennis as he pours his feelings about love into the words that he chose to be his memory after his death in 2014.