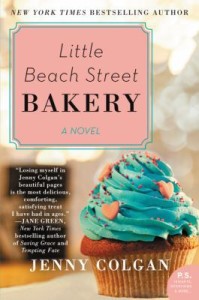 Written by Jenny Colgan, Little Beach Street Bakery, is surprisingly enjoyable. The  writing style and character development are better than you expect based on cover art and blurb, even though there’s  a bit of a formula feel.

Though Polly’s life has veered wildly off course, there isn’t really  sense of dread.  There’s a comforting feeling that it’s  probably going to work out for her, even as things go from bad to worse. The theme of reinvention is always enticing; readers get to imagine what would happen if they lost everything, but got to start over in a new place, with new people and a new job.

Set in Cornwall, England, Polly and her boyfriend opened a graphic design company not long before  computer programs allowed users to do their own design and printing. Their business failure exposed the cracks in the couple’s relationship and they eventually broke up, leaving Polly without a home or a job.

After a dispiriting apartment search, she ends up in a town that is cut off from the rest of England at high tide, living in a dirty and dilapidated building. The upsides are the ocean views, companionship of a local fisherman and a mysterious American, as well as an adopted baby puffin. The downsides are the lack of jobs, and a cranky landlady who, as the local baker,  is threatened by Polly’s skill in bread making.

Adding to the richness of the novel are secondary characters such as Reuben, an obnoxious philanthropist, Kerensa, Polly’s best friend, through whose eyes Polly is able to appreciate the advantages of her new life, and, of course, Neil, the puffin. The fishing village setting and the evolving friendships and romances make for a lovely break from the stresses of fast-paced, mainland life.