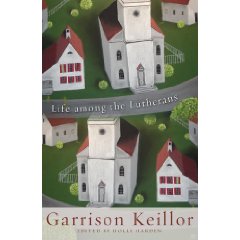 If you’ve never read anything by Garrison Keillor before, you’re missing out.  This humorist not only has his own National Public Radio show,  A Prairie Home Companion, but has written many magazine articles and more than a dozen books, including Lake Wobegon Days.

Life Among the Lutherans also takes place in fictional Lake Wobegon, Minnesota, and has that familiar style,with more than half of the chapters beginning with that signature line, “It has been a quiet week in Lake Wobegon.”  The chapters are short (3-5 pages) so it makes for an easy and fast read. Typical of Keillor, there are also a few poems thrown into the mix.

Each chapter is also introduced with an appropriate quote.  This was my favorite: “I don’t like to generalize about Lutherans, but one thing that’s true of every single last one of them without a single exception is that the low point of their year is their summer vacation.”

I was beginning to wonder why there had been no mention of lutefisk.  But then, there it was, listed as Number 2 in the Ninety-Five Theses.  No account of Scandanavian Lutherans would have been complete without some mention of  lutefisk!