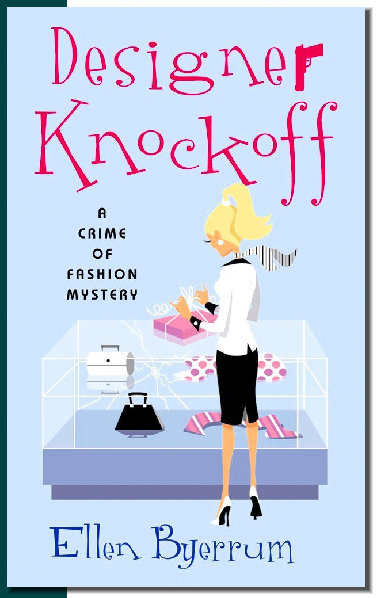 Designer Knockoff by Ellen Byerrum is the latest Lacey Smithsonian mystery. As a fashion reporter for a second-rate Washington D.C. newspaper, she investigates the disappearances of two young women. Occurring  decades apart, they begin to seem related as Lacey delves into the contemporary fortunes and World War II era history of the Bentley fashion empire.

Lacey’s Aunt Mimi left her a trunk of (now) vintage dresses, a “Bentley” suit, patterns, photos and letters from the 1940’s. These  provide clues to the mysterious fate of a talented designer who worked for the Bentley plant during the war.

Lacey continues to develop as a character – and to wage  her ongoing battle  against the monochrome suits that are the norm in Washington. Her relationship with her co-workers and a bevy of eccentric friends are a plus, as is insight into the strict clothing regulations during the war.