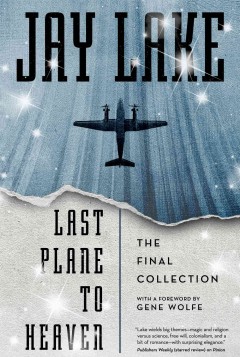 Short story collections can be a hard sell. Unless you’re a reader who already enjoys them, lovers of a longer story often dismiss their briefer cousins and  I admit that I am one of those readers. Even with an intriguing title, I’ll stay on the fence until the end of the first few stories. Science fiction author Gene Wolfe, in his introduction to this collection, acknowledges such readers, and begs us to stay for at least the eponymous story “The Last Plane to Heaven,” if only because this collection truly is the last from Jay Lake, who passed away from cancer in 2014 and because, as the author says in the dedication, “In the end, words are all that survive us.”

This bittersweet acknowledgement of the author’s own mortality (and ours) sets the tone of the wide-ranging collected stories. From a wayward android lost on Earth, to a futile mission against the agents of a Lovecraftian horror,  these stories express both a love of discovering what is over the next horizon and the liberating act of giving one’s life for such adventure. These are not stories that necessarily have happy endings. As with many short stories, they leave you wanting to know what happens next. There is a yearning that suffuses this collection, an admission that we will never know what happens next, at least in this life.

But while we don’t leave with all the answers, Lakes’ stories tell fantastic tales of the past and future. Lewis and Clark’s famous westward expedition uncovers a place that the human race is not yet ready to know of in “Jefferson’s West.” In “The Women Who Ate Stone Squid,” set in the far future, evidence of an ancient, long-dead intelligent species is uncovered, but in this discovery, humankind might invite the same destruction. “Testaments” tells the stories of the Six Sleeping Kings, each who have ushered in seismic changes in human society at the direction of a higher power, and the Seventh, who has yet to wake. The firing of a boson gun in the 1960s sets off the unraveling of the universe centuries later – but who could have imagined?

Lake gives brief introductions to his stories – the hows and whys and wheres of story writing, as well as a rueful admission that the chemotherapy that granted him a few more years of life also destroyed his “writing brain” in a truly Faustian bargain . His voice is strongest in the “Angels” stories that begin and end each section. His final words (for us at least) are written  in “The Cancer Catechism” at the end.

This not just a collection of science fiction, fantasy, steampunk and spirituality, nor is it a joyless recounting of an author’s past glory. Each story piques the imagination, and stays with you long after the tale is over. And what more could an author ask for?

One thought on “Last Plane to Heaven: The Final Collection by Jay Lake”