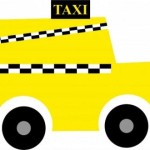 I’ve been driving the Mom Taxi at least twice a day for the past ten years and getting my fares—I mean, kids—into the car on time has been something of a struggle, especially on school mornings.

But one day, I forgot to stop the audiobook I’d been playing on my way to pick them up and we listened to it on the way home. The next morning, both kids were up and ready as quickly as I could have wished, asking if I was going to let them listen to more.

How could I say no?

I did say no to portions of it; I’d checked out Anyone But You by Jennifer Crusie, which is fantastically funny and has a manic-depressive beagle in it, but is still an adult romance.  I occasional had to lunge at the fast-forward button in the effort to avoid questions  for which I wanted more preparation time (say, ten to twelve years) to answer.

The kids still enjoyed it—partly because of the lunging, I suspect—and after the book was done, they asked if I could get another audiobook.

This time, tired of fast-forwarding (and rewinding after I’d dropped them off), I headed for the children’s section. All the branches of the Davenport Public library have audiobooks that appeal to my second-grader and others that appeal to my pre-teen.

It was trickier to find ones that would appeal to all of us. 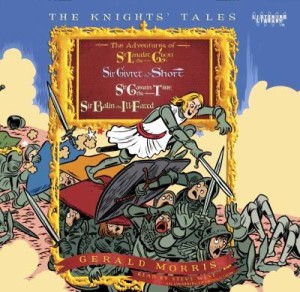 The four tales included on the five CDs are about the adventures of Sir Lancelot the Great (“He’s sooooo handsome!”), Sir Givret the Short (and his friend, Sir Eric the Not Too Bright), Sir Gawain the True (and his frenemy, the Green Knight), and Sir Balin the Ill-fated (whose mother just wants him to marry a “nice Nothern girl.”).

The main characters spend a lot of time getting into impossible situations that are unraveled by a piece of astoundingly simple logic. They’re funny and clever and twisty and very well-written.

Mr. Morris doesn’t talk down to his target audience (3rd to 6th grade) and his plots and intelligent, witty style won’t bore adults.   Mr. West uses an assortment of voices and accents that make even the minor characters—like the herald Harold, the argumentative Lady Elaine, and the Old Woman of Some Nonspecific Mountain—come to life.

These stories ensure that my kids are eager to get up and get going for the next installment—even on Mondays—and that our morning commutes are full of intent listening, predictions about what might happen next, and a lot of laughter.

For this Taxi Mom, that almost makes up for the dismal lack of tips.