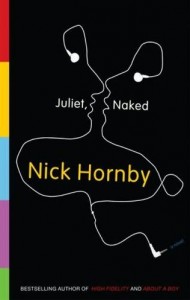 Juliet, Naked by Nick Hornby is the story of three people and their love of music and each other.  Duncan and Annie are a couple from England who have been together for 15 years, for reasons neither are really sure of.  Duncan is obsessed with musician Tucker Crowe, who abruptly gave up his music career two decades ago following the release of Duncan’s favorite Crowe album, titled Juliet.  When the book begins, Duncan and Annie (a much less enthusiastic Crowe fan) are on a trek through America visiting famous spots where Tucker Crowe spent time.  After disagreeing about the merits of Crowe’s comeback album (an acoustic work entitled Juliet, Naked), Duncan commits the ultimate betrayal, and he and Annie part ways.  But while working to mend her broken heart, Annie is contacted by the person she least expects:  the musician himself, Tucker Crowe.  The two forge a relationship that is completely unexpected, yet fitting when you finally see it come together.

I was drawn to this book for two reasons: I thought the cover was cool (yes, even librarians sometimes judge books by their covers), and the fact that it’s written by Nick Hornby.  This is the second book by Nick Hornby that I have read.  One of his earlier books, About A Boy, is another enjoyable read if you liked this book.  If you like books about musicians and their fans, Hornby’s books are for you; he is clearly very interested in music, with this book being focused on the fictitious Tucker Crowe and About A Boy carrying a large focus on one character’s fascination with Kurt Cobain.  It was interesting to see a sort of “behind the scenes” look at the life of the musician (even if he wasn’t real), and because of this, Tucker Crowe himself ended up being my favorite character.  The ending, while slightly open-ended, provided enough closure that I had high hopes for Annie and her new life.  Overall, I found this to be an interesting and enjoyable read.