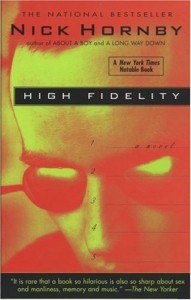 High Fidelity by Nick Hornby starts off with the first of many top five lists.  Rob Fleming, the owner of a vintage record shop in London, has just been dumped by his longtime girlfriend Laura and is assuring himself that it will be okay because he’s been through at least five breakups in the past that were more earth-shattering than this one.  This leads to a sort of odyssey as Rob decides to track down these five women and figure out what exactly went wrong and what the meaning of it all is.  Along the way he finds a new friend (and maybe a bit more) in a sexy American singer, deals with his financially-struggling business, and generally spends a lot of time joking around with his friends in the record shop.

Hornby is great at writing about people who are passionate about music.  I’ve read two of his other books, About A Boy and Juliet Naked, and in each you can really feel how much music means to the characters, and it makes you care a little more about music as well.  There is a lot of witty banter between the guys in the record shop, and Rob has a very sarcastic sense of humor, so it’s definitely good for a laugh even if it has a lot of serious moments as well.  I found myself becoming very frustrated with Rob while reading this book because as he meets each ex-girlfriend to figure out why they broke up, it becomes increasingly appalling that he just doesn’t get it.  Nevertheless, you’ll be rooting for something to go right for him in the end.  Overall, I enjoyed reading this book, and I’m planning to take home the movie starring John Cusack tonight!