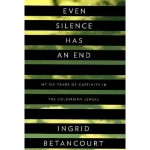 Columbian-born politician Ingrid Betancourt left the comfort of her Parisian life to run for political office in her home country with the hopes of ending government corruption.  In 2002, while running as a candidate in the newly formed “Oxygen Green Party,” she and her campaign manager were kidnapped by a terrorist organization in Columbia, the FARC.  She was held in the remote jungles of the country for nearly 6 1/2 years and, while a prisoner, Betancourt attempted numerous time to escape from her captors – just to be discovered and quickly recaptured.

Even Silence Has an End tells the harrowing struggle of her life during her years in captivity as well as her interactions with the countless other prisoners she encountered daily.  In the summer of 2008 while being moved from one location in the jungle to another, Betancourt and a small group of prisoners were loaded onto a helicopter and once airborn, they were told that they had been freed in a miraculous plan orchestrated by the Columbian government.  Her story of survival is inspirational!