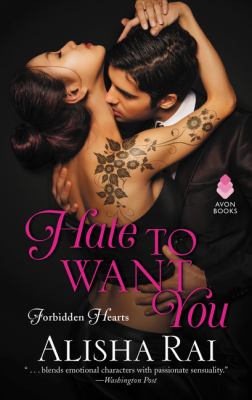 People who don’t read romance tend to assume the books are fluff. And I love fluffy books where couples meet cute and banter through silly misunderstandings until they fall in love. However, some of my favorite books in the genre are emotional heavyweights, where  main characters deal with some pretty dark emotions and difficult situations in order to get to their happily ever after.

Hate to Want You by Alisha Rai is one of those books.  It follows a couple that were each other’s first loves, until a tragedy tore apart their families. Now over a decade later, they can’t stop wanting each other, but their family and personal issues still keep them apart.

Over a decade later, Nicholas runs the business every one knows was stolen from Livvy’s family. Livvy has just kept on running, moving from one city to another, working as a tattoo artist. The only constant in her life  is the one night a year they both meet up for steamy sex, and no discussion of their current lives or past relationship. Livvy finally ends the encounters when she turns 30, and at the beginning of the book, she has finally returned to town to help her mother recover from surgery. Nicholas knows a relationship with Livvy would be disastrous, but he still wants answers about what happened.

While Livvy and Nicholas are trying to fix their relationship, they also work on trying to have healthier relationships with the people in their lives.  Livvy has dealt with depression her entire life, and she is realizing that leaving her family behind and losing touch with people she cares about has made things worse.  She’s trying to reconnect with family and friends she hasn’t been there for, but as everything family related, it’s complicated. Her mother is not eager to have her adult daughter show up out of the blue, and she’s still adjusting to her aunt and best friend sharing opinions on her life, or forcing her to rethink family dynamics.

While Livy is trying to reconnect with her family, Nicholas is trying to untangle his. His father is power hungry and volatile, and Nicholas tries to play peacemaker with him at work, while protecting his sister’s place in the family. Since he can’t control his father, he maintains tight control over his life, leaving no room for emotion or indulgence, except for his one night a year with Livvy.

Both Nicholas and Livvy are still mourning people they lost when their families fell apart, and part of the story is figuring what really happened in the fallout, and taking a look at how the past is still impacting them.

Between family secrets, steamy romance, and two main characters with a lot of issues, this book has a lot going on, and Rai’s strong writing  pulls it all together. In the end, the emotional payoff is worth all the drama we went through getting there. We don’t get every  answer to the families tragic past, but there are two sequels planned, and they sound good. (Wrong to Need You, about Livvy’s best friend  is coming out the end of November.)