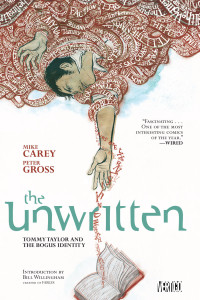 Welcome back to Part 2 of my retrospective review of two graphic novels that have recently ended! Earlier, we looked back at  “Fables” by Bill Willingham & Mark Buckingham. Now, as promised, we’re on to  “The Unwritten” by Mike Carey and Peter Gross. Much like “Fables,” I was introduced to “The Unwritten” by a fellow librarian. As he remembered it:

This week a co-worker came up to me with a crazed look in her eye and said “Yesterday I was shelving some comics and started flipping through the first volume of The Unwritten. Before I knew it I’d read all five volumes the library owns. When will there be more?” It’s always great to watch someone enjoy something I liked a lot. It’s even more fun when their excitement borders on the maniacal. – Andrew, “No Flying No Tights”

Like Fables, Unwritten originates in the story-telling world. Instead of the fairy tales of old, Unwritten beings in a modern age fable of Tommy Taylor. The Tommy of the title is the main character in a highly popular series of books written by the reclusive author Wilson Taylor. The Tommy Taylor series is modeled on the Harry Potter books (with Tommy as Harry) complete with wizards, wands and made-up Latin spells.

There is another Tommy in the story, however, the “real” one (perhaps). Tom Taylor, son of Wilson and on whom the character was modeled (or maybe not). Tom has grown up in the spotlight and shadow of his father’s fame. With his father’s mysterious disappearance after the release of his last book, Tom travels the convention circuit reluctantly, having failed as a musician, actor and author. It is at one of these “TommyCons” that a young woman calling herself  Lizzie Hexam publicly casts doubt on Tom’s identity and whether or not he is Wilson Taylor’s son. 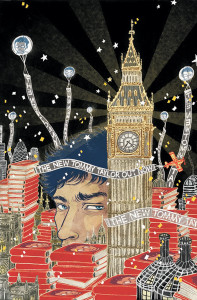 The notion that Tom is a fraud creates an explosive amount of controversy, with a level of emotion only devoted fans can muster. Tom becomes a pariah, and on his way into hiding, is kidnapped by a crazed attacker pretending (or is he?) to be Count Ambrosio, the Lord Voldemort to our Tommy. With all of the internet watching, Tom survives and is suddenly elevated to  messianic status, something that turns out to be nearly as bad as being universally reviled.

But Tom’s fortunes are about to change, again. Tom – now doubting his own past – begin looking for answers of his own. The search takes him to his childhood home of Villa Diodati in Switzerland (not coincidentally, this is also where Mary Shelley wrote  Frankenstein, or, The modern Prometheus – the novels are filled with these bits of literary trivia and seeming coincidences.) Tom, joined by Lizzie, finds more questions than answers, though, along with a map, a crystal doorknob and more than a few dead bodies. It seems that Tom’s activities have caught the attention of some very dangerous people who don’t seem to be fans of Tommy Taylor.

Accused of the murders and thrown into a French prison, Tom find himself sharing a cell with a reporter named Savoy, who bribed his way into the prison to report on Tom’s activities. Lizzie shows up to break them out and thwart a hit on Tommy, ordered by the prison warden Chadron whose children are fans of the Tommy Taylor series and, tragically, are killed in the escape. Maddened by grief, Chadron becomes Count Ambrosio.

Throughout the series, we travel a vast literacy landscape. The epic poem Song of Roland, the Nazi propaganda film Jud Süß, Moby-Dick (of course), The Canterbury Tales, the Golden Age of Comic Books, the French operetta Orpheus in the Underworld, a world that seems to be a mix of Winnie the Pooh and Peter Rabbit (with a very, very bad Peter)  the world of Fables and many, many more, not to mention what is happening in our own world. With so many stories running parallel to each other with multiple intersections, the series finds itself, at times, bogged down in its own mythology. In the later volumes, some of the most enjoyable aspects of the series – the seek-and-find of clues drawn into the panels – is dropped entirely. Lizzie Hexam’s story devolves from a real-life heroic and confident Hermonie character, to a damsel in distress, living, loving and dying at the whim of Tom’s father. Even 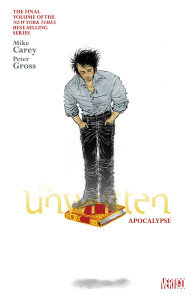 the art is plainer, with simpler lines and little dimension.

In the final two volumes, War Stories (#10) and Apocalypse (#11), some of the threads are drawn together, building up to the final, final conclusion. Carey and Gross have created a very deep world, and it’s probably inevitable that some story lines are dropped. The morals of the stories can be heavy-handed, with the big bads a little too bad. While Unwritten tries at telling a universal creation story, ultimately, this is a story of a father and a son and the age-old question of who creates whom.

Bad Behavior has blocked 1351 access attempts in the last 7 days.