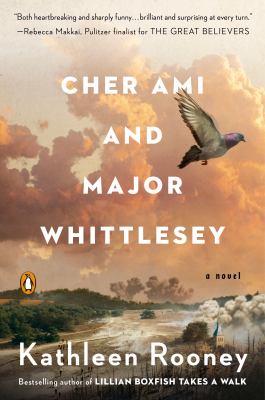 Even in the midst of a brutal, horrific war, the story of the Lost Battalion – a US Army regiment that, following orders, advanced on German strongholds, outpacing their support and became trapped behind enemy lines – stands out as one of the bloodiest, most worthless engagements of the war. Two unlikely heroes emerge from this nightmare, their lives forever altered in unforeseen ways.

Cher Ami and Major Whittlesey by Kathleen Rooney tells the story, in alternating chapters, of Major Whittlesey, the scholarly, solitary lawyer that led the doomed 77th Division and Cher Ami, the messenger pigeon that is credited with saving those that managed to stay alive.

Cher Ami, born and bred in England and lovingly trained in the proud tradition of messenger pigeons, now resides in the Smithsonian, a taxidermied observer of the humans that pass through the great museum, musing on the changing times and attitudes. The museum goers look on Cher Ami with pity or sorrow, having little knowledge of the breadth of what she saw and experienced, from her bucolic home in England to the war-torn fields of France, the freedom and joy of flight and the mysterious “voice” that brings her home to roost again and again.

Major Whittlesey is also mostly unknown, by his commanders, by the men he leads, by his family and all but his closest friend. Quiet by nature, he is a homosexual at a time in history when it would be dangerous to admit to, so he keeps to himself and his books. At first glance he is completely unsuited to lead soldiers into war, and yet he takes the job seriously, with intelligence and compassion and is loved by his men. When the orders that will doom his division arrive, he knows it will be a disaster, but his objections are overruled. When the battalion is trapped, without food or water for days, surrounded by Germans and running out of ammunition, Whittlesey works tirelessly to encourage his men, offer comfort and support where he can and never backs down.

Just when it seems it couldn’t get any worse, friendly fire begins to rain down on the 77th Division’s trenches – misguided bombs from the Americans. Desperate to end the bombardment, Major Whittlesey sends one messenger pigeon after another (all telephone lines have been cut and  runners have been killed or captured) German snipers target and kill each pigeon as it takes flight until only one remains. Even though she is badly wounded, Cher Ami manages to survive and deliver her message, helping to save the remaining soldiers of the 77th.

Based on true events and people (and pigeon) Cher Ami and Major Whittlesey is a gripping, sober look at a terrible war and the price it demanded. The long, proud history of homing pigeons, which were used to deliver messages through World War II, was fascinating and a bright counterpoint to the mud and trenches of battle. This is book covers a dark and difficult period of history but Cher Ami’s thoughtful musings and Whittlesey’s dry humor keeps the reader engaged and anxious to find out what happens next. Highly recommended.

Bad Behavior has blocked 1351 access attempts in the last 7 days.