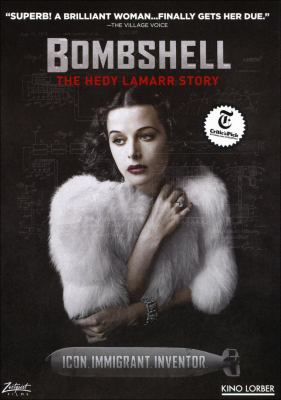 After watching Bombshell: the Hedy Lamarr Story, I’m left to wonder what Hedy Lamarr would have become had she been born 50 or 75 years later. Instead of being valued solely for her appearance, would she have been given the opportunity to use her genius to its full capacity? What could the world now be like with a compassionate and caring woman at the engineering helm of invention? Could she have been another Einstein or Edison? Her intellect seems to have been squandered and that’s a shame.

Along with an unearthed tape-recorded phone interview with Lamarr, the filmmakers interview her children, a friend, Hollywood notables, and her granddaughter to compile a portrait of this complex woman. Lamarr was an Austrian Jew with an inquisitive, mechanical-engineering mind from an early age. She was impacted indirectly by the rise of Adolph Hitler before making her way to the United States via London. Even on the strategically-booked boat ride to the US, she leveraged her captivating presence to land a Hollywood contract with MGM’s Louis B. Mayer and showed her fortitude by negotiating for higher pay.

In a time still under the slowly-loosening grip of the Victorian era, a film she made while a teen in Austria, and that was scandalous for its time, Ecstasy, continued to haunt her most of her career.  It appears she was rarely given roles she was capable of and was even cast in demeaning roles because of her “reputation.” Early on she was a devoted mother, but like so many other women who were treated as commodities by Hollywood moguls, she was given drugs for various reasons. This lead to her becoming moody and abusive.

Lamarr seemed to have a complicated relationship with her image. She certainly used it to her advantage but was also resentful about not getting the recognition she thought she deserved for her intellect also because of her image. She and musician George Antheil invented and patented “frequency hopping,” now called spread-spectrum technology and used in Bluetooth, GPS, and military applications but never saw a dime for her efforts. She seemed to ultimately buy into the world’s superficial perception of her, of her value only as the glamorous Hollywood bombshell, with her many plastic surgeries and refusal to appear in public at the end of her life.