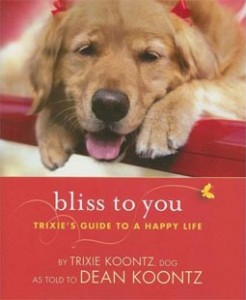 This book is written by a dog.  Granted, a very special dog —  a golden retriever named Trixie.  And even though Trixie passed away in 2007, she is still, remarkably, writing books.  Of course, it probably helps that she was owned by bestselling author Dean Koontz, who may still have a little something to do with her success.   In fact, Koontz states that the Trixie  page on his website is one of the most visited features.

Trixie has inspired several books, including A Big Little Life, in which Koontz wrote about his relationship with his beloved pet.  But she’s also inspired some new children’s books, such as I Trixie, Who Is Dog , the rights to which have recently been purchased in order to create a new family comedy show.  But her speciality is definitely books such as Life is Good or Bliss to You, which are written in dog-speak, as is if Trixie is narrating the story.  Though for the most part, this is utterly charming, I’ll warn any ex-English teachers out there (myself included) that dogs apparently do not always use correct syntax.  Still, the book is warm, funny, inspirational and short –you can easily find bliss in one short sitting — making it an ideal gift for dog-lovers come Christmas time.

One other reason to support these books:  since Trixie originally served as a Canine Companions for Independence (before she went to live with Dean and Gerda) all royalties are donated to this organization.

Bad Behavior has blocked 1610 access attempts in the last 7 days.