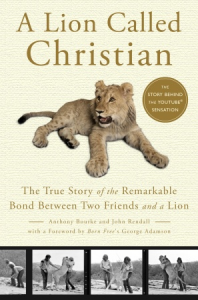 Perhaps I thought about this blogging assignment a bit less conventionally, because the pet I read about is, if you didn’t guess it from the title, a lion.   A Lion Called Christian by Anthony “Ace” Bourke and John Rendall tells the story of how the two men bought a male lion cub named Christian from a department store in London back in the ’70s (who knew they sold lions?!) and cared for him for several months.  For the bulk of this time, the guys and their lion lived above a furniture store, where Christian got to play and interact with the customers.  Ace and John learned how to train Christian, feed him, and play with him in a safe way.  As Christian got older and more restless, the two men knew that something had to change and found a way to move him to Africa after being “rehabilitated” and learning how to survive in the wild with a pride.

This book was very interesting and I learned a lot about lions from it.  Even though I’m sure Christian’s story is unusual, it was fun to hear about how lion cubs play and interact.  The end was very inspiring; it was clear that Ace and John had nothing but Christian’s best interests at heart.  Though I hate to spoil the ending of the book for you, I simply must direct you to this YouTube video.  It’s actually how I originally heard Christian’s story, and it’s really heartwarming.