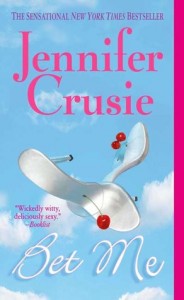 This novel is everything good and everything bad about so-called “chick lit.” Bet Me is a contemporary romance that follows an actuary, Minerva Dobbs, who falls in love with a businessman, Cal Morrisey. All the great things about chick lit are here: a comforting happy ending, a heroine who struggles with her weight (how relatable!), a sizzling romantic connection, and the kind of supportive female friendship that anyone would wish to be part of. But all the cliche chick lit negatives are here too: love at first sight and rapid-fire courtships, a heroine with a negative body image (how typical!), Krispy Kreme donuts used as a tool of seduction, overbearing and critical moms, boring B-stories, way too many descriptions of shoes, a poorly realized setting (neglected no doubt to give more text to the developing romance, which doesn’t need it), absurd coincidences, and a ridiculously neat happy ending.

It’s a pretty sharp novel overall; the characters aren’t deep or unique, but they’re not hateful or wooden either. The dialog is crisp and cute and the whole book reads really quickly, so it’s a great choice for light reading. If you’re picky, be warned: there are quite a few breaks with reality. There are only about a dozen characters in this book and they all interact very intimately, whether they’re lovers, ex-lovers, old friends, family, or strangers – it reads very high school even though these are all supposedly career-oriented individuals in their thirties. The wedding subplot with Min’s sister as a bride is hopelessly unrealistic (at one point, Min has to take over catering the rehearsal dinner, which is for only 14 people AND it doesn’t include an actual wedding rehearsal. what?!). Min lets a feral cat into her house and feeds and sleeps with it without even giving it a bath or a once-over with a comb, let alone taking a trip to the vet. This is another classic problem of chick lit: authors tend to steamroll over realism to achieve the symbolism or plot developments that they have planned, and it’s just plain distracting. You can’t tell me that Min is a smart woman and then show me her sleeping with a mangy wild cat in her bed; one of those two things is a lie. If that kind of light touch doesn’t bother you, Bet Me is as scrumptious and sweet as a Krispy Kreme – but like the fabled donut, it’s mostly hot air.

Bad Behavior has blocked 1412 access attempts in the last 7 days.