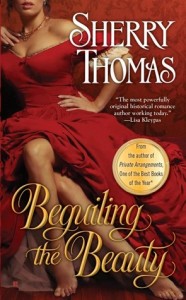 The titular beauty of Beguiling the Beauty is Venetia Easterbrook, a young widow widely regarded as the most beautiful woman in London society, who vows revenge against the Duke of Lexington when he slanders her good name. Since he knows her by her famously stunning face, she wears a veil to seduce the Duke, London’s most eligible bachelor, while crossing the Atlantic on a luxurious steamer, planning to ditch him at the end of the journey and teach him a lesson about love gone wrong. Little does she know that their shared love of fossil-hunting and study of dinosaurs will cement their intellectual compatibility even as their physical chemistry sizzles.

Sherry Thomas’ newest novel, first in a planned trilogy, is a delight: it’s absurd, it’s sensual, and it’s great fun! In what other novel is the gift of exquisitely preserved tetrapodichnites (fossilized dinosaur tracks) fraught with emotional significance?! Where else in literature does a veil that blocks the wearer from seeing, eating, and kissing seem like a glamorous accessory with only the addition of a few paillettes? Nowhere!

With the exception of the denouement (which is silly) and the groundwork laid for the two planned sequels (which is distracting), this romance is a pure, unadulterated delight. The historical setting feels genuine rather than slapdash, and Thomas’s writing is smart and snappy. A flat-out perfect beach read for any romance reader, though it doesn’t stand up to vigorous literary scrutiny: after all, the Beauty is the one doing all the Beguiling here, and if even the title doesn’t take this book too seriously, how can readers? Despite that, the conceit of the masked seductress combined with the interest in paleontology makes this romance uniquely entrancing – or even beguiling.