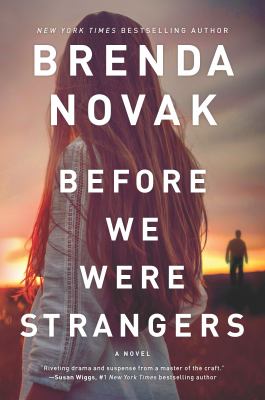 In college, I read primarily romance novels, but now that I work in a library surrounded by an infinite number of books, I find that I’m straying away from those old comforts. In an effort to reintroduce myself to romance novels, I have been reading a lot of ‘romantic suspense’ by Sandra Brown and other authors. I recently found Before We Were Strangers by Brenda Novak and decided to give this romantic suspense author a try.

Before We Were Strangers by Brenda Novak tells the story of how far one woman is willing to go to dig up her family’s dark secrets. Sloane McBride’s mother disappeared when she was five. Something happened to her mother the night she left, but no one wants to talk about it. Sloane was in the house the night her mom left and heard some things that she believes could have to do with her mother’s disappearance. Sloane heard her parents arguing and the things they were talking about made her skin crawl. In the midst of their arguing, a thump reverberated throughout the house. After that noise, the house went completely quiet. The next morning, Sloane discovered that her mother was gone. According to her father, her mother left and was never coming back.

Her father insisted that her mother just up and left, a situation that doesn’t sit well with Sloane given what she overheard that night and the fact that her mother was very loving and devoted to her two children. After their mother left, Sloane and her brother are raised by their strict and domineering father in their small Texas hometown. Desperate to escape, Sloane moves out of the town as soon as she turns eighteen and eventually ends up working as a model in New York. Despite all the distance between Texas and New York, Sloane is still haunted by what could have happened to her mother.

Thinking herself strong enough to stand up to her father and brother now that she has been away for ten years, Sloane decides to head back to Texas to finally find out the truth of what happened to her mother. Returning to this small town means that Sloane has to deal with her jilted ex-boyfriend, an angry best friend, a disappointed brother, and a father who will do anything to keep her from finding the truth. The more Sloane digs into her mother’s disappearance, the more dark family secrets she uncovers. As she learns more about what happened, Sloane is left to wonder how much of a coverup went into hiding what happened to her mother and just how each person she is investigating fits into this mysterious puzzle.