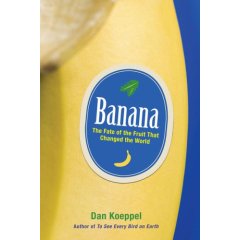 The banana is the perfect food! A snack with it’s own handle that comes in a biodegradable wrapper, it’s the ultimate convenience food. This unassuming, soft, sweet fruit has a fascinating and treacherous history. In Banana: the fate of the fruit that changed the world, Koeppel sets out to explore the scientific, economic, political, and historical aspects of the lowly banana. For good measure he even throws in a dose of banana humor.

While the history of how the banana spanned the globe makes for good reading, the real drama begins when the fruit was domesticated by shrewd American businessmen in the late 1800s. They realized the economic potential of the tropical fruit and set out to make it available to the masses. Through marketing and advertising, U.S. banana importers were able to make a product grown thousands of miles away cheap enough that it became a daily snack for many Americans. This was not without cost though to the fruit itself and those directly involved with production and harvest.

It’s not exaggeration to say that the banana has shaped and toppled nations. In Central and South America, workers who attempted to unionize were squelched by the influential banana industry which was backed by the U.S. government. Thousands of workers died in these insurrections.

The human toll in the banana industry parallels the destruction of the fruit itself. Only one variety of banana was commercially cultivated because it was transportable and long-lasting. This proved to be fatal when in the 1950s it was wiped out by a soil fungus. A replacement species was introduced, but it too is susceptible to the same fungus. Every banana we buy is a genetic duplicate of the next, and this lack of biodiversity is threatening to totally eradicate the fruit.

While the book can be very somber, it also provides many fun facts that you can use at your next party. Did you know:

As a librarian I always enjoy it when a patron asks a question about something that relates to my own personal interests. Recently I helped a patron with a question about totem poles. In 2004 I accepted a an interim library job at a small college in Sitka, located on the coast of Alaska, a decision that turned out to be a tremendous adventure. One unique Alaskan adventure I was able to experience was the placement of a new totem pole. Carved in Sitka National Park, the entire town was invited to the totem pole raising ceremony, where, after several ceremonial rites including a formal naming ceremony, adults manned the ropes on the sidelines which helped to guide the pole as children from the town tugged on the two long ropes which pulled it up and into place.

It is said that the most important person or object on a totem pole is the one that is at the base. This is an important distinction between Western and Native culture (since we usually think that “low man on the totem pole” designates a low status). There is a pole in a main square in downtown Sitka which illustrates this cultural difference. At the time this pole was constructed, the govenor insisted that he be placed at the top. Since the object of ridicule is always at the top the carvers were happy to grant the governor his wish!

The University of Alaska at Anchorage has an excellent website including an authoritative article on totem poles as well as a wealth of information about Alaskan history and culture. A trip to Alaska is always unforgettable; check the library for travel guides (917.98) and information on it’s colorful history (979.8) as well as the dvd aisle for a taste of the state’s spectacular beauty. And for more pictures of totem poles, look for The Most Striking of Objects: Totem Poles of Sitka National Park in our Government documents collection.

Many of us have learned that Easter is the first Sunday after the full moon which occurs upon or after the vernal equinox. This was true when it was established by the Council of Nicea in 325; however, calendars and calculations have changed since then and so this is not technically correct.

Secondly, since 326 A.D., the Easter Sunday date for any given year has not been determined by the March Equinox date (which can be either the 20th or the 21st), but by March 20th only.

Each year it is the intention of Christian churches to celebrate Christ’s resurrection on a Sunday that would correlate with the exact day of the astronomical full moon on which his resurrection was said to have taken place; however, solar and lunar months don’t match, hence the development of a method of calculation and its various revisions which have taken it from its basis in the old Jewish calendar to the Julian, and then the Gregorian calendars.

Most Christian scholars have placed the Last Supper on Passover (the 14th day of Nisan), the crucifixion on the 15th, and the resurrection three days later on the 17th. Three days in the grave – from the 15th to the 17th appears to be a discrepancy until we take into consideration that WE count the days from midnight to midnight, but ancients considered the new day as beginning at sundown the day before; hence the day of what we consider to be the 15th was considered by them to be a continuation of the 14th.

Is your head spinning yet? There are ever so many more technicalities and intricacies to the method of calculating Easter, and those of you who enjoy debating how many angels can dance on the head of a pin may enjoy pursuing more information about the Golden Number, the Metanomic Lunar Cycle, and the Epact on the Catholic Encyclopedia website.

And this site not only gives a great explanation of the calculation of Easter, but also provides information about Jewish, Islamic, Chinese and Indian calendars that are in use (and some others that are not)

So, how do we answer the question “how is Easter calculated?” As you can see, a technically correct answer could be incredibly complex; how about we all continue to say “it’s after the first full moon which occurs on or after the vernal equinox” and let’s just leave it at that! 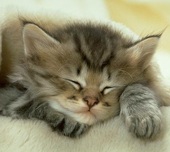 Did losing that hour of sleep leave you feeling like you could use a nap today? Well, you’re in luck because the first Monday after the return of light saving time is officially National Napping Day. This observance is designed to make people aware of the health and productivity benefits of napping, especially at the workplace.

To help convince your boss that workplace napping is a great idea, check out The Art of Napping at Work by Camille and William Anthony (154.6 Ant) The authors present everything from nap management to ideas for converting the napaphobics among us.

When presenting your case for the necessity of nap time at work, don’t be afraid to drop the names of famous nappers like JFK, Winston Churchill, Thomas Edison, “Nap-olean” Bonaparte, Johannes Brahms, Jim Lehrer, and Bill Clinton. If these highly effective people napped, shouldn’t we all be able to catch a few winks at work?

As National Napping Day is observed let’s also remember that on March 10, 1876, Alexander Graham Bell invented the telephone, and nap time has never been the same since.

What about you, do love naps as much as me? 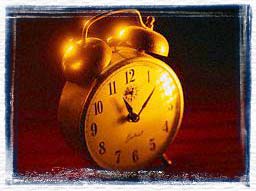 Get ready folks, Daylight Saving Time begins at 2 A.M. on March 9th. Here are some things to think about as we spring forward.

2. No daylight is actually saved. But who wants to say Daylight Shifting Time?

3. Daylight Saving Time is not observed in Hawaii, American Samoa, Guam, Puerto Rica, the Virgin Islands, the Commonwealth of Northern Mariana Islands, and Arizona. Notice all these locales are nice warm spots? They probably don’t care so much about shifting their sunny hours.

5. The idea of Daylight Saving Time was first conceived by Benjamin Franklin.

7. Now the Easter Bunny will have more time before the sun rises to hide eggs.

Is your head spinning from all the conflicting studies about what you should or shouldn’t eat? Michael Pollan makes a case for eating simply in this, his follow up book to The Omnivore’s Dilemma. He isn’t concerned with calorie counting or faddish lists of do’s and don’ts, but rather promotes a balanced, reasonable and pleasurable approach to food. Eat food. Not too much. Mostly plants. With so many “edible foodlike substances” on the market, Pollan advocates eating whole foods our grandmothers would recognize rather than the processed foods that claim to be nutritious. Fellow foodies will find this a refreshing book by a man who clearly loves good, real food. This is a great read to inspire lots of shopping at the local Farmer’s Markets this spring.

Also check out Barbara Kingsolver’s Animal, Vegetable, Miracle: A Year of Food Life for more ideas about how to eat local and fresh. 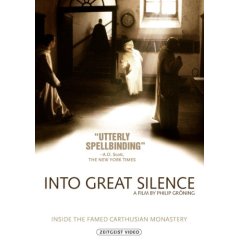 Into Great Silence is a compelling film that chronicles the lives of the ascetic monks of the Grande Chartreuse in the picturesque French Alps. This is a unique movie in that there is no voice over and few subtitles. The tolling of the immense church bells calling the monks to prayer provides us with a rare glimpse of the rhythm of daily life for the men who live outside of the hustle and bustle of our modern time. This stark yet beautiful documentary introduces viewers to the symbols, rituals, and traditions that the Carthusian monks have followed since the founding of this hermit order in the eleventh century.

Bad Behavior has blocked 1683 access attempts in the last 7 days.