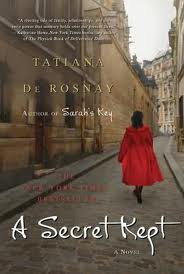 The bestselling author of Sarah’s Key, Tatina de Rosnay, has written another winner.  A Secret Kept literally keeps the reader in suspense, wondering if the secret will ever be totally revealed.

Antoine takes his sister Melanie on a 40th birthday trip to  Noirmoutier Island, a lovely place where they had spent several enjoyable summers as children.   But something about the island also brings back troubling memories for Melanie.  On the return trip home, just as Melanie is about to reveal her fears to Antoine, she loses control of the car.  The book opens with Antoine waiting anxiously in a hospital waiting room, wondering if Melanie will even survive.

Antoine finds himself confronting not only his past, but his present family relationships as well.  Unhappy since his divorce just a year ago, he has difficulty communicating with his children and he has always felt distanced from his father.  He senses the secret revolves around his mother, and he wonders about her sudden death so many years ago.

I really enjoyed this book.  The tension is kept sufficiently tight, and the character development, realistic.  Plus, if you’re a francophile, you’ll appreciate some of the many French references! Incidentally, the author was recently named one of the top ten fiction writers in Europe.

One thought on “A Secret Kept by Tatina de Rosnay”

Bad Behavior has blocked 1399 access attempts in the last 7 days.