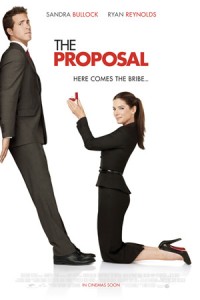 February 29th will be here before we know it! Yay, we need more February, right?

The Proposal  doesn’t actually take place in a leap year as far as I know, but Sandra Bullock’s character, Maggie, does follow that holiday’s tradition of a woman proposing to a man.

The ruthless Maggie, in order to avoid deportation, forces her subordinate, (Ryan Reynolds), to marry her. Hilarity ensues when they visit the groom’s  family in Alaska. As is mandatory, Betty White plays a grandmother prone to mildly offensive insults and truth telling.

Alaska, Bullock and Reynolds are enjoyable to behold. You could do worse than pop this into the dvd player on your extra day of 2012.