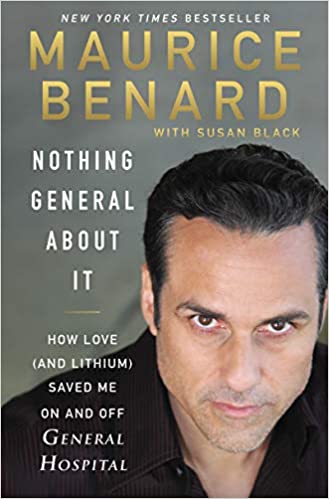 Maurice Benard, the American actor of Salvadorian and Nicaraguan descent who has played the character Sonny Corinthos on the ABC soap opera General Hospital for twenty-seven years, has written a biography this year called Nothing general about it; how love (and lithium) saved me on and off General Hospital. The Emmy award-winning actor may not be known for his writing, but he gets real in this book and that is worth more than any award. He lays bare the ugly things he did while in the throes of bipolar disorder, a disease he has suffered from nearly his entire life. He is honest about his vulnerabilities and gives credit to the people in his life who have loved him through it all, especially his wife of 30 years, Paula, who had to endure some frightening moments with him. His story is a testament to how difficult and pervasive mental health problems can be, no matter how you look, where you’re from, how much money you make or what you do for a living.

In 2006, the writers of General Hospital revealed that the character Sonny Corinthos suffered from bipolar disorder. Since then, Benard has publicly advocated for mental health awareness on talk shows and with organizations like the National Alliance on Mental Illness (NAMI). He is a spokesperson for the Depression and Bipolar Support Alliance (DBSA).

Fans of General Hospital or Benard will appreciate the full-color photographic insert, containing his and Paula Smith’s wedding photos, images of his four beautiful children, and members of the General Hospital cast. Readers who are dealing with their own or a loved one’s mental illness will likely find it relatable and insightful. You can check out his book in the Biography section at the Library at Eastern, or place a hold and have it sent to a location of your choosing.

Bad Behavior has blocked 1368 access attempts in the last 7 days.