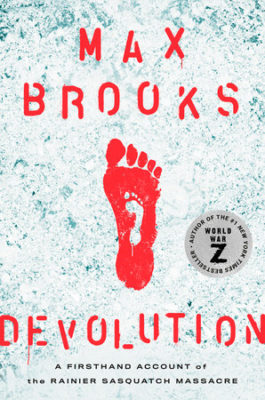 You might not think that horror would be a good genre to turn to during These Troubled Times ™, but it’s  been one of my favorites since the 9th grade (shout out to Mr. Healy for introducing me to Stephen King!) In fact, back in March, I re-read World War Z  by Max Brooks, just for fun (I‘m weird, I know.)

I was very excited to read Brooks’ latest novel Devolution: A Firsthand Account of the Rainier Sasquatch Massacre. Much like World War Z, Devolution is told as a collection of first-person recollections, book excerpts, interviews, and journal entries. It is these journal entries, written by Kate Holland and discovered at the massacre site by her brother Frank that make up the bulk of the novel.

Kate and her husband, Dan, have joined a small “eco-community” in Washington state hoping to save their marriage. Built deep in the woods, Greenloop appears to be an idyllic escape from Silicon Valley, while still maintaining a connection to civilization through 24/7 internet connections and weekly drone deliveries.

That is until Mt. Rainier erupts.

Greenloop suddenly finds itself cut off from all communication and without enough supplies to survive for very long. The other members of the Greenloop community react to this crisis in varying and maddeningly frustrating ways. When nature –  with which some of the residents so desperately want to connect to – begins to turn on them, most remain in denial.

At least, until people begin to disappear and a troop of carnivorous Sasquatch is quite literally pounding down their doors. This assuredly is not a book for the squeamish, though it will teach you how to make an effective spear out of bamboo and kitchen knives.

With Brooks acting as narrator, he pulls testimonies and consultations together to present a story that feels incredibly plausible. And that is the mark of a great horror story – it makes you pause and examine that rustle in the bushes just a little more closely.