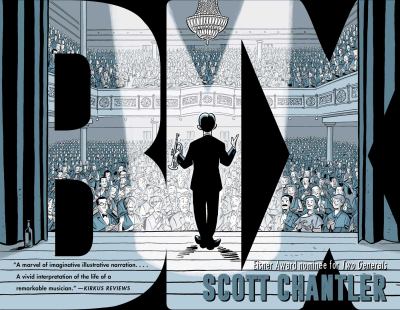 Despite living in the Quad Cities nearly 20 years I have only a rudimentary knowledge of local jazz legend Bix Beiderbecke. I feel like I am missing out on an important part of local lore.

In the graphic biography Bix by Scott Chantler, the musician’s story is illustrated rather than told. With the use of wordless, static, straight panels we get a sense of Bix’s confining young life when in school and interacting with his parents, particularly his father. As a reader, I can feel the panels trying to fit him into a box, making me feel claustrophobic for the protagonist. Finally the panels begin to float and dance on the page whenever music is in the scene — whether hearing it pass on a riverboat, trying the trumpet for the first time or upon entering a Chicago jazz club.

Once Bix makes the decision to leave Iowa and dedicate his career to music he leads a life typical of young adults: work, good times, and romance. Just when I started to think of Bix as a nice guy who got swept up in talent and fame come scenes that show an in-demand, cocky musician willing to lie and manipulate. In this graphic biography, we don’t hear Bix speak until this part of the book — about a third of the way through. His first conversation? A lie he tells his girlfriend. Bix becomes difficult to work with and unreliable. Static panels return to show drinking as a default reaction to everything — both good and bad. As his drinking spiraled out of control, my heart broke for the lost talent.

I was pleased to catch the familiar scenes of Davenport in the early pages. It took me the better part of an afternoon to read, but the time was spent getting a better sense of of who Bix was beyond his connection to the Quad-Cities. The life of Bix Beiderbecke doesn’t fit neatly into a box. He wasn’t just a ground-breaking, successful jazz soloist. He wasn’t just a wide-eyed innocent guy in over his head. This graphic novel treats its subject with compassion and care while not forgiving him for his self-destructive behavior. Through artful storytelling I have a better understanding of Bix’s multilayered life.

Bix is available on Overdrive as well as physical format.