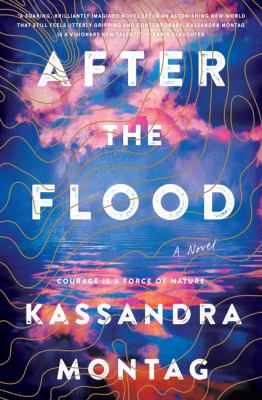 I picked up this book to read because the cover was relaxing and the lines swirling over it looked like map lines. It turns out that I was right! Those are map lines after all and they turn out to be a key element in this book.

After the Flood by Kassandra Montag is set over a hundred years into a dystopian future where rising flood waters have crept up and overtaken the continents. This slow rise of water has obliterated and destroyed the mountaintops and known landscape and has, as a result, left in its place deep wide expanses of open water.

Myra is angry. Why is she angry? Her husband Jacob abandoned her while she was pregnant with their daughter Pearl. To top it off, he took their oldest daughter Row with him when he took off. Myra and Pearl are travelling from island to island on Bird, the boat that Myra’s grandfather made in the attic of their house before he died. Surviving by fishing and trading at the islands they visit, Myra is constantly on the lookout for any information about Row and Jacob.

Their life may be tranquil and at an even keel, but Myra knows that this peace can be interrupted at a moment’s notice. A bad wave, an interaction with violent people and breeding ships, or a fish shortage could all spell disaster for the pair. While stopped at an island to trade, Myra learns that Row may in fact still be alive. This chance encounter leads her to pack up Pearl, search for help, and start the dangerous journey to The Valley. Far up north, the trek to The Valley will be full of breeding ships and savage people looking to steal anything they can and willing to take over any unsuspecting ships. Add in the fact that The Valley might be going through an epidemic and Myra needs to get there as soon as she can to save Row.

On their way to The Valley, Myra and Pearl are hit with obstruction after obstruction with death and strangers littering their path. They eventually end up on board the boat, Sedna. This boat couldn’t be more different than Bird: Sedna has a fully able crew and seemingly all the supplies they could ever need (food, ammo, weapons, building/boat materials). Myra slowly discovers that in order to make it to Row and rescue her, she will have to betray and deceive everyone around her. Is Myra willing to sacrifice Pearl in order to save Row? Is Row even there? Could this all be for nothing? Myra has to decide what she’s willing to do to find out the truth.